Britney Spears is back and she’s headed to the big screen. Well, at least her new song is. 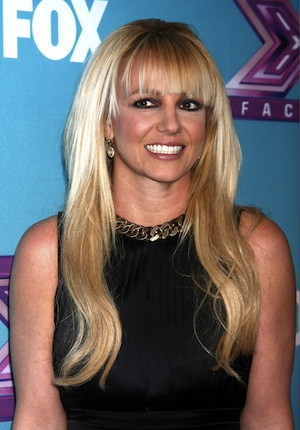 Now that Britney Spears is done with The X Factor, she is able to get back to what she does best.

No, not going grocery shopping for Lunchables.

No, not changing her hair again.

No, not having another breakdown — the other thing she does best.

Making music! The thing she does best is making music.

See out list of awesome songs from last year’s movies >>

The sequel to 2011’s hit family movie The Smurfs, The Smurfs 2 follows Smurfette as she is kidnapped by the evil Gargamel and taken to Paris. With the help of their live-action people friends, the whole Smurf crew must smurf to Paris, smurf Gargamel and then smurfy smurf Smurfette.

Spears added that she is excited to be a part of the film, especially now that she’s a mom. “I have always loved the Smurfs as a kid and now my boys are the biggest Smurfs fans EVER. I wanted to surprise them with a song in the movie.”

But Spears won’t be the only pop princess to Smurf it up. Along with returning actors Neil Patrick Harris, Glee’s Jayma Mays, and Modern Family’s Sofia Vergara; Katy Perry will reprise her role as Smurfette.

While this will be Britney’s first solo track in two years, we can expect many more hits from her very soon. She is currently in the studio recording her 8th album, due out later this year.

The Smurfs 2 is set to hit theaters on July 31. Check out the trailer below.