South Asian fiction has become increasingly popular in the Western world. While celebrated authors such as Salman Rushdie, Vikram Seth and Rohinton Mistry introduced many aspects of South Asian culture and literature to the world, it’s writers such as Jhumpa Lahiri, Arundhati Roy, Thrity Umrigar and Ru Freeman that have continued the trend and given both the rich and poor in these countries a voice. More South Asian, and specifically Indian, writers have been making their debuts every month; our Red Hot Book of the Week is a stunning debut novel about the connection between the upper and lower classes, money, power, wealth and crime called The Hope Factory. 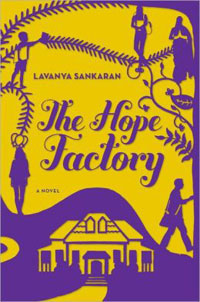 To everyone around him, and indeed the entire city of Bangalore, Anand is a rich man. He’s a success story, one whom people both admire and envy. Wealthy with a beautiful wife and a good, stable marriage—what more could anyone want? But Anand has secrets of his own, one of which is that he needs to expand his business in order to survive. He needs a new factory, but that won’t come without land or money, difficult things to procure in urban, industrializing Bangalore.

Kamala is Anand’s maid, and she’s been living on the brink of collapse for some time now. Between India’s wealthy and poor lies a large chasm, and Kamala’s been feeling it more now than ever before. She hopes and prays that things will get better for her and her teenage son, but when the ups and downs of her life are tied to the whims of her mistress, Anand’s capricious wife, it’s difficult to know anything for certain.

As both Anand and Kamala face very different kinds of disaster, their individual desperations have the potential to lead to complex and difficult consequences. After all, we must all face the outcomes that arise from our choices. Readers will rally and cheer for both of these characters, hoping that the difficult situations they find themselves in won’t lead them to compromise their principles and that, in the end, everything will work out for the best.