Rick Ross thinks he deserves a second chance after Reebok dumped him over his rape rap — but Reebok strongly disagrees. 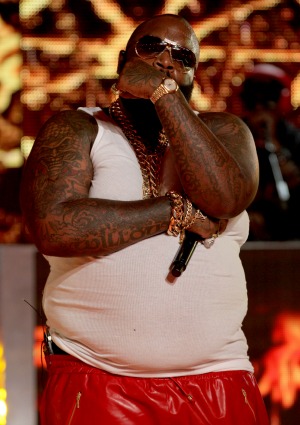 Reebok dumped Rick Ross after a public uproar over a song in which he bragged about giving a girl drugs and raping her — but the hip-hop star says he’s the real victim here.

“Molly” is slang for the drug Ecstasy.

A petition circulated online calling for Reebok to drop Ross as a celebrity spokesperson, and after he refused to apologize — dismissing the furor as a misunderstanding of lyrics — the sportswear company did just that.

“Reebok holds our partners to a high standard, and we expect them to live up to the values of our brand. Unfortunately, Rick Ross has failed to do so,” the company said in a statement. “While we do not believe that Rick Ross condones sexual assault, we are very disappointed he has yet to display an understanding of the seriousness of this issue or an appropriate level of remorse.”

Ross, a recent drive-by shooting victim, removed the offending lyric from the song — but not because he suddenly saw the light about glorifying rape culture. He did it so the song would get air play. “Because of the type of traction that the record has as far as radio, it puts me in a position where I have to change it,” he told Hot 97?s K-Foxx and Ebro.

But now Ross is pouting over being “betrayed” by the company, according to TMZ, allegedly telling friends that Reebok owed him a second chance after he brought a ton of street cred to the brand.

Reebok is so not having it, and so the rap star must say goodbye to somewhere between $3.5 million – $5 million, the estimated amount he was set to earn including checks each time he wore the sneakers.