Rumors that Liam Hemsworth and Miley Cyrus are breaking up instead of tying the knot have flown for months. Now Miley’s dad Billy Ray adds fuel to the fire by explaining that the couple are “really good friends.” 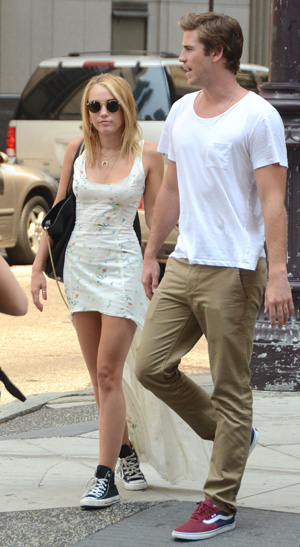 Are Miley Cyrus and Liam Hemsworth broken up or soon to marry? Don’t bother asking Miley’s pop Billy Ray Cyrus: He has no idea.

The elder Cyrus did an interview with ABC News to promote his book, Hillbilly Heart. He addressed the rumors that the pair has split.

When asked about his daughter’s wedding plans, Cyrus said, “I know as I was writing the book I wanted to keep that particular moment as open-ended as possible.”

Why? Because, “I didn’t know the answer. They’re young. They’re kids. The great news is, they’re great friends. They’re really, really good friends. If you end up getting married, that’s your business too, you know?”

Um, so reading between the lines, that’s not exactly a stout denial of a split.

So will the pair actually marry? “I don’t know. I really don’t,” Cyrus said. “I play it by ear and I know whatever is meant to be, that’s the way it’s going to happen.”

So you haven’t been asked for deposit money for a wedding venue, you’re saying?

Life & Style quotes a source that said the pair was supposed to marry in June. “But there have been so many problems with them, they thought it was best to work out their issues before making such a big commitment,” the source told the magazine.

It’s worth noting that both Cyrus and Hemsworth are very young — 20 and 23, respectively.

“They aren’t ready. Their families are both concerned,” the source told Life & Style. “They don’t want to see Miley and Liam get married and then get divorced. They’re very young to be getting married.”

Life & Style asked Hemsworth’s sister-in-law, actress Elsa Pataky and wife of Liam’s brother Chris Hemsworth, if she had any inside info. “I don’t know,” she told the magazine. “If they get married, it would be nice [to go to the wedding].”