What does Stevie Nicks have against Reese Witherspoon? The iconic singer said she thinks the actress is too old to play her in a Fleetwood Mac biopic. Amazingly, Witherspoon agrees. 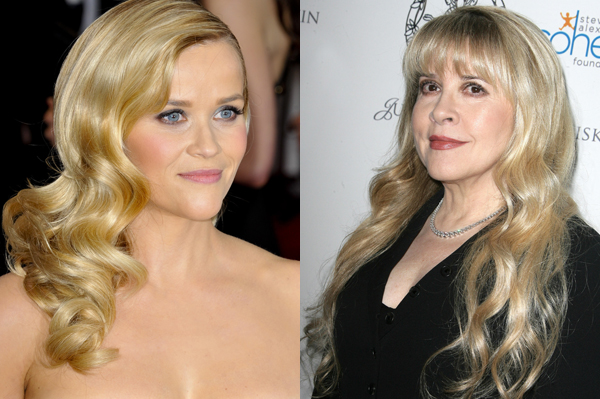 Stevie Nicks is not good at making up her mind. The former Fleetwood Mac singer once said she wanted actress Reese Witherspoon to play her in a biopic.

“I’ve already told [Reese] she’s almost too old,” Nicks told ET Canada at the premiere of her new documentary, In Your Dreams.

Why the change of heart? The 37-year-old actress is now past the age to convincingly play the blonde singer during her Fleetwood Mac heyday.

But, the new mom of baby Tennessee isn’t insulted by it.

Nicks might want to reconsider that, though: Witherspoon did win an Oscar for her portrayal of country icon June Carter Cash in Walk the Line. Both Carter and Nicks are strong women — and Witherspoon is a strong woman in her own right. It’s a win-win (at least to us). Plus, Hollywood makeup pros can work a lot of magic these days… just sayin’.

But, an actual Fleetwood Mac biopic is a long way off. For now, Nicks is focusing on her documentary.