Beyoncé and Jay-Z are crazy rich, right? Wouldn’t you like to know how rich? 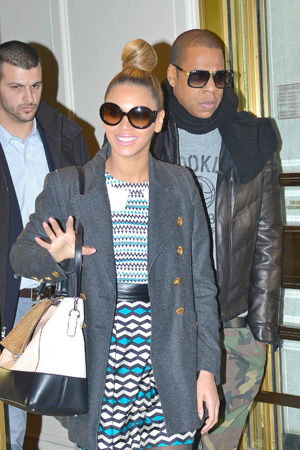 One billion dollars. That’s how much the International Business Times says Beyoncé and Jay-Z are worth.

Now, that’s not how much they’ll rake in this year, but that’s the estimated amount of the Carter family fortune.

How does their garden grow? Well, first of all, Bey’s “Mrs. Carter” tour is set to make $116 million, The Daily Star reports. Her endorsement deals with everyone from Pepsi and L’Oreal to Tommy Hilfiger and H&M also net millions.

Meanwhile, Jay-Z owns two locations of the 40/40 Club and a share of the Brooklyn Nets (although Yahoo Sports reported he was selling it to finance a move into representing basketball players with his Roc Nation Sports management biz). Jay-Z has also had endorsement deals with Budweiser and Duracell.

Forbes named the duo as two of the highest-paid musicians of 2012, with a combined $78 million in earnings.

Wow, that’s a lot of scratch! Are they the richest couple in music?

Nah, says Entertainment Weekly. Paul McCartney is worth more — around $1.04 billion, according to the London Sunday Times’ “Rich List.” His “On the Run” tour earned $57 million in 2012, he was paid bank for starring in Queen Elizabeth’s Diamond Jubilee and in the opening and closing ceremonies for the Olympics in London and he’s married to a rich lady who’s heiress to a trucking company fortune.