Madonna’s 16-year-old daughter Lourdes has a thing going with a boy! But Daddy’s coming along for the date. 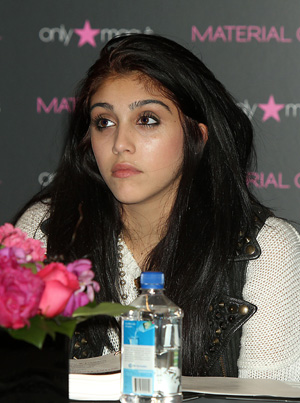 Who would have thought Lourdes Leon would be a typical teenager, straining against the rules her strict parents lay down? But it’s true: the daughter of Madonna and actor/personal trainer Carlos Leon has been complaining that her dad’s too strict, Radar Online reports.

The teenager and high school student has been seeing a fellow student at the LaGuardia High School of Music & Art & Performing Arts, Homeland actor Timothée Chalamet, and Leon is so watchful he accompanied them on a date Sunday night.

The Daily Mail ran pictures of Lourdes and Chalamet out to dinner in NYC, walking in the streets of SoHo with Chalamet’s arm casually slung over Lourdes. And just a few steps away: Papa Leon and his girlfriend.

Yes, it’s a date with your boyfriend! And your dad!

“You would think Madonna was the stricter parent, but she’s actually loosened the reigns (sic) because she trusts Lourdes so much,” a source told Radar Online.

“On the other hand, Carlos is the watchful dad who’s laid down some very stern ground rules for his precious daughter,” Radar Online quotes the source.

When Lourdes was younger, the source told Radar Online, Madonna was “firm” about “school studies and manners.” But as Lourdes has grown older, Leon’s emerged as the stricter one.

Now, Madonna “secretly gets a kick out of it when Lourdes complains to her about the curfew her dad’s imposed and all the embarrassing questions he asks her and Timothee. For a change Madonna is not the mean parent!” the source told RadarOnline.

The Daily Mail says that when Leon was asked a couple of years ago about Lourdes dating he said, “I’m dreading it… I want her to stay young forever. I’m already overprotective, so when the time comes, I will be ready to have a talk with the guy she brings through the door. He better be ready because I’ll give him the run-down!”

“He’s old school and he thinks putting a little fear into the boy dating your daughter is a good thing,” the source told RadarOnline.