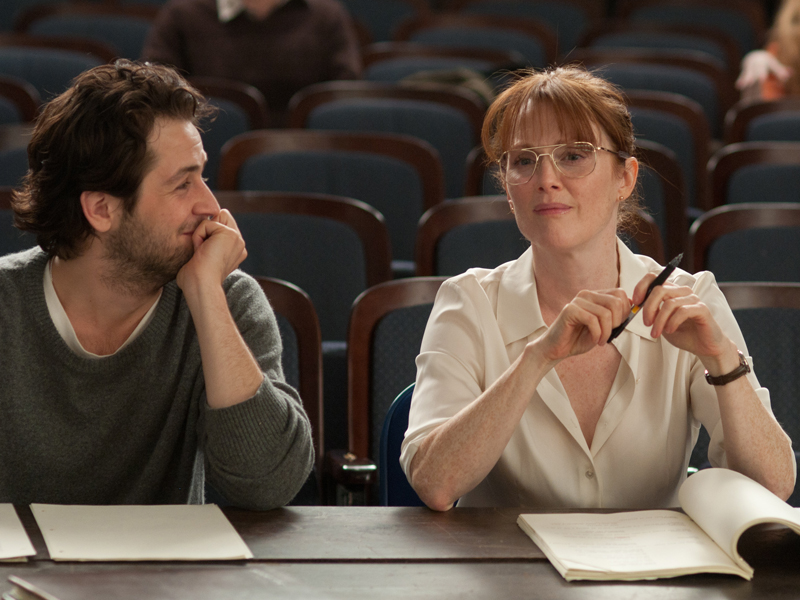 The English Teacher offers a refreshing alternative to the big budget films set to open during the next few months.

Set in Kingston, Pennsylvania, the film stars Julianne Moore as (you guessed it) an English teacher named Linda. Having been unlucky in love, she has few personal relationships. Her life of simplicity is shaken up when she encounters Jason (Michael Angarano), one of her former students.

After failing to find success as a playwright in New York, Jason has reluctantly returned home and is considering giving up on his dream and attending law school.

Determined to inspire Jason to continue pursuing the arts, she hands one of his plays over to her colleague and drama teacher (Nathan Lane), who agrees to turn it into a production at the school.

Matters become complicated when her relationship with Jason takes a romantic turn.

SheKnows has obtained an exclusive clip of the Craig Zisk-directed comedy in which Linda catches Jason in a lip-lock with one of her students (Lily Collins) and is appalled. Despite the pair’s apologetic state, Linda is determined to reprimand them. Jason attempts to ease her concern but seemingly fails to do so.

The film marks one of Moore’s many forays into the world of dramatic comedy. Who could forget her portrayal of a conflicted lesbian mother in The Kids Are All Right or her turn as a woman struggling to repair her broken marriage in Crazy, Stupid Love?

Chloë Moretz is a tormented teen in new Carrie trailer >>

Angarano first caught the attention of audiences as Jack’s teen son in the hit series Will & Grace and has made a name for himself in low-budget fare such as the riveting horror thriller Red State and the romantic drama The Art of Getting By, alongside Emma Roberts.

The English Teacher will hit theaters on May 17.