It looks like congratulations are in order for Emily and one of her many love interests. 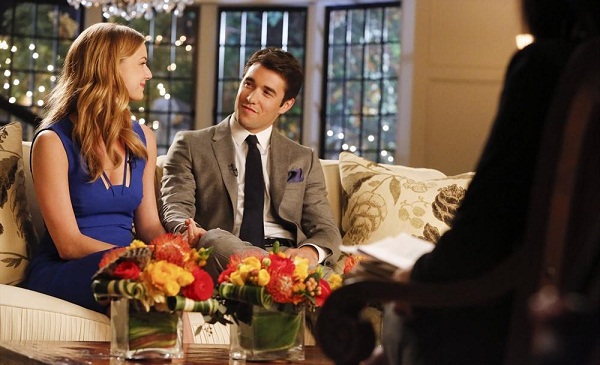 ABC unleashed one massive spoiler recently when it released the title and description for an upcoming episode of Revenge. The episode, simply called “Engagement,” was a pretty big spoiler on its own. But the who’s and what’s of the situation aren’t immediately obvious.

Emily (Emily VanCamp) has long been known to float between a couple different handsome fellas. There was her childhood sweetheart, Jack. Her former flame, Daniel. And, of course, her undercover lover, Aiden. So… which man will win her heart?

The answer sits in ABC’s official description: “Emily plots her next move in her new role as Daniel’s fiance, while Aiden struggles with the re-engagement.”

The biggest question, though: Just how real is this engagement? Revenge fans will certainly remember Emily and Daniel’s rocky past. In a previous interview with TVLine, creator Mike Kelley reminded them of just what Daniel is up against.

“As far as her future with Daniel is concerned,” he said, “for the time being at least, it’s firmly cemented in her revenge plan.”

As he put it, Daniel has “given her little reason to have true affection for him because he’s been such a bastard in so many ways.”

Sounds like any “yes” Emily gives to Daniel will only be part of her grand scheme. That’s fine with us, though, as we’re still determined she’s meant to be with Aiden. Sure, the childhood romance between Jack is super cute and would make for a sweet story. But once Emily is done reliving the past in order to gain revenge and secure her future, we think she’ll want to leave it all behind. Plus, who really marries their childhood sweetheart?

Sounds like we’re being set up for a seriously awesome season 3, doesn’t it?!