The goth-y tattoo artist says her wedding to Canadian DJ Deadmau5 will be “the furthest thing from traditional.” We have to agree. 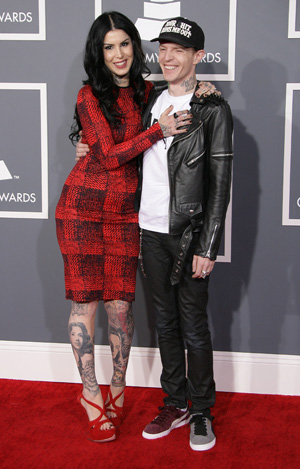 Something old, something new, something borrowed, something Cthulhu. Tattoo artist/LA Ink star Kat Von D is mulling over wedding plans that look something like this, she tells People, with she and fiancé Deadmau5 working on an August ceremony with an “underwater”/Lovecraft theme.

And yeah, Kat Von D. is apparently throwing a Cthulhu-themed wedding. That is non-traditional!

The theme will take a watery form, with performers dressed as mermaids, blue and green food (best to avoid blue/green meat, guys, OK?) and what Von D describes as a watery-colored dress.

“It will have a sleek silhouette and include hints of iridescent teals, blues and deep violet ombré gradients,” Von D told People.

She also told People Deadmau5 is helping her design it. “I didn’t know the dress was supposed to be a surprise,” she said.

Sadly, it doesn’t sound like the actual wedding will take place underwater. Or that there will be monsters there.

The couple got engaged on Twitter back in December, with Deadmau5 (real name: Joel Zimmerman) tweeted a picture of a diamond ring with the center stone flanked by two skulls. “I can’t wait for Christmas so…. Katherine Von Drachenberg, will you marry me?” he tweeted.

Kat Von D, who was previously engaged to Sandra Bullock’s ex, Jesse James, replied with a string of exclamation marks.

17 hrs ago
by Lily Shell