Was Aubrey Plaza just rowdy and drunk and hoping for publicity when she weirdly rushed the stage at Sunday’s MTV Movie Awards? Or is something else going on? 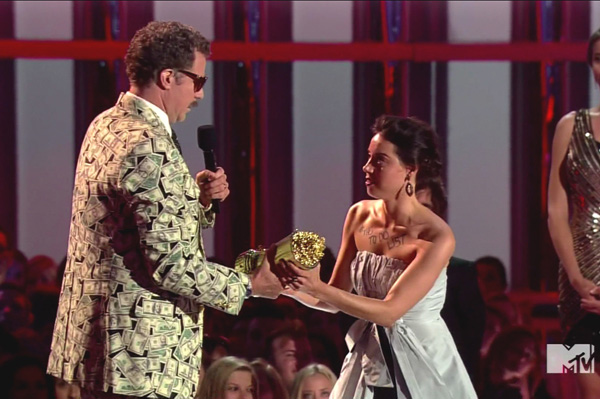 Parks and Recreation‘s Aubrey Plaza pulled a real WTF moment at the MTV Movie Awards on Sunday night, rushing the stage in a moment that recalled Kanye West’s stage-bombing of Taylor Swift in 2009.

West, however, used his stage-usurping to give a little speech about Beyoncé getting robbed; Plaza just appeared to be looped.

MTV reports that the actress was one of the last celebs to arrive before the show began and a few minutes afterward popped into what MTV calls a “celebrity holding room” and emerged with the title of her latest movie, The To-Do List, scrawled in marker across her chest.

The show began at 9; Plaza sat in her front-row seat for an hour, but when Will Ferrell came to the stage to accept his Golden Popcorn for Comedic Genius, she swung into action.

Dressed in a short, strapless white dress that looked a little cockeyed in the back, Plaza quickly ran up the steps, drink in hand, and tried to pry Ferrell’s award out of his hands. He held on gamely and asked “What’s happening? Are you OK?”

Ferrell, proving he has timing if nothing else, smoothed over the awkward moment with a little “Hey, you crazy girl!” hand gesture while indicating Plaza in the crowd. “Just like we rehearsed it,” he said, tongue-in-cheek.

Why else should join Will Ferrell as an MTV Comic Genius? >>

Plaza looked embarrassed at first back in her seat, and then smiled as Ferrell led the audience in applauding.

“I think she wanted to tell me something important,” Ferrell said after the show to MTV, saying that he’d smelled “a lot of hot liquor breath.”

Since Plaza did have “#TheToDoList” on her chest, our guess is that she was hoping for a little free viral marketing, but that she decided to perform her little stunt in the limo on the way over, coaxed on by a lot of booze.

Well, there you go, Aubrey Plaza. Was it worth it?

MTV says Plaza was escorted out at the next commercial break and was “cooperative” with police.

Later on that night, Plaza tweeted “Thanks for the advice @kanyewest went better than planned! #mtvmovieawards #chrisbosh #thesecret.”

Fans responded, asking Plaza if they could “murder her vagina” and wondering if the hangover was gone yet.