Things just got a heck of a lot worse for the Bates family when Norman makes a surprising discovery, Norma deals with her arrest and Dylan enters the dark side. 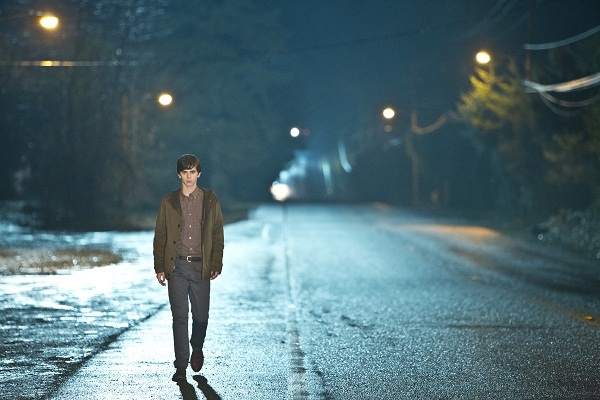 Could things get any crazier at the Bates Motel? Apparently, after tonight’s episode, the answer is a clear yes! Norman (Freddie Highmore) is dealing with girl drama on multiple levels, Norma (Vera Farmiga) is fighting for her freedom and Dylan (Max Thieriot) just crossed a major line that proves he is related to Norma after all.

First things first, Norman is dealing with the affliction referred to as “young love.” After his intimate encounter with Bradley last week, he’s more in love than ever, and unfortunately, she may not be feeling the same way. He hasn’t heard from her in two days. Even his awkward and long-winded voicemail didn’t prompt a response from his new sweetheart. Maybe he was simply a way to get her mind off of her recent trauma? This cannot turn out well for our serial killer in the making.

Norma is having more luck in the love department, or so it seems. Zach (Mike Vogel) confessed his love for her, finally, but was also quick to tell her that the two can’t see each other any time soon. It’s too dangerous for the new couple considering he’s law enforcement and she’s just been arrested for murder.

However, he does come to her rescue and gets rid of all the evidence from Keith’s murder. When the carpet fibers suddenly disappear, the case against Norma is dropped. So, she’s free at last… for now.

Things take a turn for the worse when Norman and his gal pal Emma (Olivia Cooke) hunt down and finally find the missing Asian sex slave. This part included my favorite line of the night, “If I had an Asian sex slave, where would I hide her?” A little morbid humor that certainly follows the tone of the show.

Once they find her, they bring her back to the motel where she tells Norma it was Zach who hid her in the basement and raped her. Oh man, Norma is gonna lose her mind over this one.

And finally Dylan had a little drama of his own. His fellow weed security guard was shot in the neck right in front of him. Later Dylan finds the shooter and runs him over with his massive lifted truck. It’s unlikely the guy survived. It was pretty intense.

It looks like murder runs in the family and Norman is bound to end up as the psycho we’re all familiar with. It’s all starting to make sense.