The internet is abuzz with comments dissecting the punky-pop band’s new sound for the self-titled album release — but the jury is still out if this is a good or bad development. Our favorite track, however, is definitely a winner! 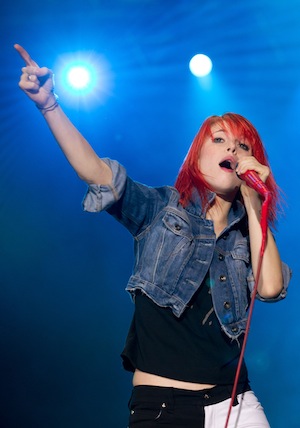 Paramore, a Tennessee band who had a firm grasp on a unique sound, has relinquished their reign and seemingly adopted a sound with a new vibe for their self-titled fourth album.

What’s their new vibe? A happy one.

So who dare criticize that? Plenty of the die-hard fans that find their revised aura to be a little surprising.

Is it really all that surprising in the wake of the loss of original members, Josh and Zac Farro?

Not at all — I mean, I figure if you lose some of the foundational components to your sound, the music inevitably will be different (were the Spice Girls the same without Ginger?).

Anyway, producer Justin Meldal-Johnsen is credited with their makeover, with Hayley Williams having told The New York Times, “If you haven’t heard any Paramore albums,” she added, “start with this one and not the first one.”

Sounds like the band is not experimenting with this, and they are even proud of where they are. My pick off the album, “Hate To See Your Heart Break,” is a vulnerable piece that reminds us of Ingrid Michaelson’s “The Way I Am.” Don’t believe me? Fast-forward to the chorus.

It’s a lulling, precious ballad sung with an optimistic outlook on love. It’s targeted to a broken spirit with doubts of moving on, and the lyrics and soothing vocals from Williams give promise to this as being a universal favorite.

It’s the opposite plot line of “You Are The Only Exception” but sung with the same unwavering hope. While most of us look to the chorus to be the cathartic release, the bridge has the most profound wisdom.

Want more updates on all the musicians breakups and reunions well as new album releases? Sign up for our newsletter! >>

Readers, check out the album and my pick below, and drop a comment to let me know what you think!

Need more music? Check out our other music reviews: