If you thought Karina Smirnoff and Jacoby Jones dancing the foxtrot to a twangy country tune last week on Dancing with the Stars was impressive, you ain’t seen nothing yet! Tonight, the dynamic duo tackles a tough jive and working with an ex. Karina tells us about rehearsals that left her feeling like jelly and how she felt re-teaming with Maksim Chmerkovskiy. 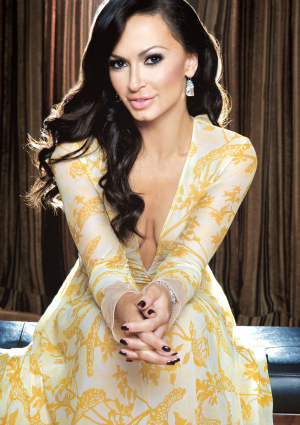 SheKnows: Karina, I cannot believe you were able to choreograph a foxtrot to the country song “Watching You” by Rodney Atkins!

Karina Smirnoff: Thank you! It was a challenge! In the beginning, we were just thinking the song was great, and then we got the music and started working on it and I was like, “Oh my goodness, what was I thinking?” But instead of worrying about how it’s not necessarily the perfect song for the foxtrot, we just started dancing to it, and I think it fell into place.

And after the show, Rodney Atkins — I don’t know if he was watching the show or if a friend of his called him about it — the moment we finished dancing, he tweeted us! He was like, “Thanks, man, that’s awesome!” And Jacoby and I tweeted right back to say thanks to him, and that it was an honor using his song.

SK: Were you surprised to get such rave reviews from the judges?

KS: When we were getting ready to dance, Jacoby was in the zone. And I knew it — I was so excited to dance because I knew he was going to do well. But I had a false start! Before the music even started, I started running to Jacoby! (laughs) But while we danced, as we went from section to section, I just saw that he was so much in the dance and going for it, that I was thinking, “This guy is nailing it!” And the energy of the dance kicked in and we could see Junior in the audience and Mama Jones was all emotional — everything just came together! I remember when we finished the dance, we were just looking at each other like, “This is awesome — we love the foxtrot!”

SK: You and Jacoby’s last two dances were very emotional — Prom Night, which brought up how Jacoby lost his school to Hurricane Katrina, and “Best Year” night, which Jacoby dedicated to his son, Junior. Do you feel like your relationship has changed over the last few weeks?

KS: I knew he had a lot of other sides we didn’t get to see maybe in the packages — cause the packages are only a minute and a half long — but once you get to know the real person behind the man or the personality you see in the press, you get to appreciate him much more. I know better now how to work with him, how to teach him a new way, how to be his partner — of course, the better you know someone, the better you are able to give them 100% of what you think they need to go all the way in the competition.

But it’s like, I loved the guy from the moment we met, and I think every day he shows me more surprises. He’s awesome! I tell him that, too. I tell him I would not have asked for any other partner because I love every minute we spend connecting — even when we have a little fight, you know? It doesn’t go with out them, but I respect the way he handles them. We had a disagreement; he literally took maybe 20 or 30 minutes and called me up. He doesn’t like to stay angry, and I think that is a wonderful quality in any person. That’s when the problem gets squashed, and you move on to bigger and better things!

SK: It was clear from the clips that you and Jacoby butted heads a bit over the foxtrot during rehearsals. Did rehearsal go better for this week’s dance?

KS: Oh, much better. This is the week, in my opinion, that you need to show your partner has been challenged and overcame it and came out on top. So this jive that we’re doing tonight, it reminds me of doing, like, the Iron Man. At the end of the jive, we are both on the floor, struggling to get up because we are hyperventilating, and we are exhausted. (laughs) This jive is no joke! By the end of this dance, my arms are like jelly, like I can’t move them. Not to mention, it’s two minutes long! It’s just so intense! So that’s the only challenge we have this week.

SK: What has been your favorite dance you two have done to this point?

KS: You know, I think jive might be our favorite because we both light up when we start dancing it — well, at least the first half of it, and then we get really tired and our smiles turn into this painful expression where your teeth stick to your lips but you keep on smiling because you know you have to! (laughs) But we do like the jive a lot. I think, to me, our rumba was the point where people started to go, “Wait, he can do emotional? He can do sensitive?” I think I’ll always have a soft spot for the rumba.

SK: You move so gracefully, Karina, and with such ease. It makes it seem effortless, but we know that’s not the truth! How many hours per day and days per week do y’all rehearse for each dance?

KS: Thank you! Sometimes we rehearse between 5 – 6 hours a day, to sometimes even more, like 8 hours a day. And it’s every day… 7 days a week. The only day we have a relatively easy rehearsal is Sunday, cause I want him to let his body rest. And I want him to miss the dance a little bit, because when you keep pounding it in and then tell him to do it again, we get into a situation where he’s like, “AGAIN?!” It’s hard work! But I think what we’ve been good at is blending what Jacoby’s natural feeling is with the technicality of the dance, and I think that’s the key to making it look natural and not going through hell and back while you’re doing the jive. (laughs)

SK: So, we hear this week you had to work with Maksim [Chmerkovskiy]…

KS: Yeah, we had to work with Maksim and Anna [Trebunskaya], which was fun and kind of difficult. You know, Maks and I have history together, so it was definitely an interesting week for me. And for Jacoby too — he got to work with three Russians! I’m like, “Dude, I am not jealous of you at all… this is not easy!” But, you know, it’s interesting, because obviously Maks and I are good together now — we’ve moved past whatever situation it was we had— but it was great to see how much I could rely on and feel the support from Jacoby. No matter how great we are with Maks and we’re there to dance and let bygones be bygones and whatever, it’s still tough. It is what it is! I was hoping I would look at Jacoby and have that support system, and I did. He is truly a team member. He knows what’s up!