Next month, Paramount will release the blockbuster sequel, Star Trek Into Darkness. It marks the return of the Enterprise crew, which includes Zoe Saldana’s Uhura. Here’s the latest character poster that puts her in the center of the action. 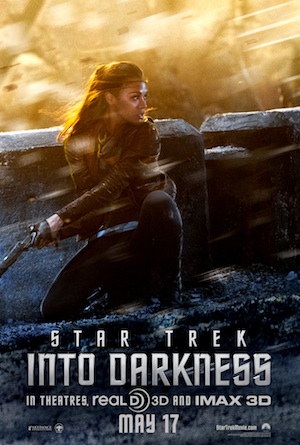 Over the weekend, Paramount ramped up the marketing for Star Trek Into Darkness, releasing a new poster featuring Zoe Saldana as Uhura. It features the first lady of the Enterprise with guns blazing.

As stated by Paramount’s synopsis:

“In the wake of a shocking act of terror from within their own organization, the crew of The Enterprise is called back home to Earth. In defiance of regulations and with a personal score to settle, Captain Kirk leads his crew on a manhunt to capture an unstoppable force of destruction and bring those responsible to justice.”

Harrison will push them to their limits. His attacks aren’t just physical. He plans to assault them mentally and emotionally as well. His presence will test every member of the Enterprise crew. The studio teases that “sacrifices must be made for the only family Kirk has left.”

New trailer: Star Trek Into Darkness is a rough ride >>

Star Trek Into Darkness opens May 15 for IMAX 3D, and everywhere else May 17.

What do you think of Saldana’s character poster?