Olympic swimmer Summer Sanders managed to finish Monday’s Boston Marathon, but she heard the explosions from her hotel less than an hour after crossing that finish line. 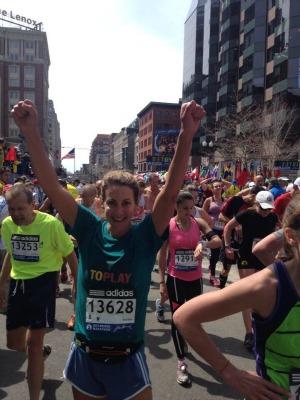 As the news continued to pour in from different media sources, Twitter became a surefire way for celebrities who were racing in Monday’s Boston Marathon to confirm they were OK after the explosions. NKOTB member Joey McIntyre and Survivor Season 2 winner Ethan Zohn were among the 27,000 reported runners in the annual marathon.

Another public figure, Olympic swimmer Summer Sanders, was also there participating in the Patriot’s Day race. The athlete was running in conjunction with the charity Right to Play, which is a global organization that uses “sport and play as a way to educate and empower children and youth to overcome the effects of poverty, conflict, and disease in disadvantaged communities.”

Sanders was trying to raise $10,000 for the cause by running in the Boston Marathon. She also used her Twitter feed to update her followers about her pace and whereabouts on the course.

The Olympian crossed the finish line at 1:56 p.m. EST, which was less than an hour before the first explosion occurred.

When Sanders heard the noise, she took to Twitter to seek answers.

She wrote, “Can anyone tell us what happen near the marathon? Felt two BIG booms that shook our hotel and saw smoke on Boylston.”

Within minutes it was very clear what had just happened at the finish line of the race.

The sports commentator said, “This is totally tragic and my heart goes out to all involved and the city. #Boston”

Sanders was then placed under lockdown at her hotel for safety reasons, but was eventually evacuated from the hotel because it was close to the action and safety responders had concerns for those in the area.

She continued with her plans to fly home to her family as her flight was still scheduled to take off from Boston’s Logan Airport .

Her final tweet, after a day that started with so much promise for her charity, stated “Heading home. Exhausted and Emotionally Drained from this day. My heart goes out to all those affected. “