Rumors surfaced over the weekend that Sharon and Ozzy Osbourne were on the rocks. Son Jack says nope. 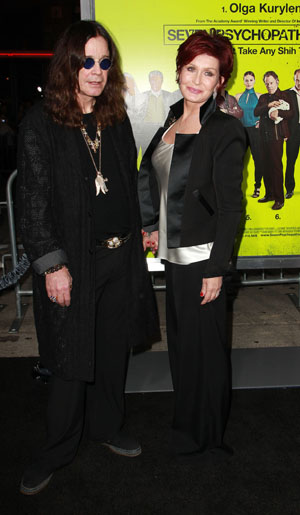 The Osbournes’ marriage is not in trouble, says son Jack Osbourne, who used Twitter to slam rumors that parents Sharon Osbourne and Ozzy Osbourne were splitting up.

British newspaper/tabloid The Sun reported this weekend that the two Osbournes were living separate lives and about to break up.

The paper said that Sharon was staying in a hotel while her new Beverly Hills home is renovated. Meanwhile, Ozzy is renting a property a few miles away.

Lindsay Lohan not pregnant, neither is Sharon Osbourne >>

A source told the Sun, “They are living at different addresses and are not spending any time together. They row a lot.”

No, not on the water. Fighting. They fight a lot. Sez a “source.”

“They aren’t acting like husband and wife. It is unusual to not even have dinner together when both of them are five minutes apart,” the source continued.

Hey, Sharon and Ozzy have been married for a long time. Who wants to have dinner with your spouse of 31 years? You’ve said it all.

Sharon’s people said that the couple is “still together” but are both busy: “They’ve both got huge work commitments. She is at the hotel for work and he is starting his Black Sabbath tour… Sharon and Ozzy have spent long periods of time apart before when she was working in the UK. The marriage is not on the rocks,” the Post quoted the reps.

What work Sharon is doing is unknown, though she holds down a co-host spot on The Talk and is rumored to be returning to the X Factor panel this year.

The Examiner also reported that Ozzy and his Black Sabbath bandmates will appear together on the season finale of CSI, where the band will also debut a new song. The Black Sabbath album is the first from the band since 1978.