Who knew an image of posh sunglasses over a white backdrop could be so artful? 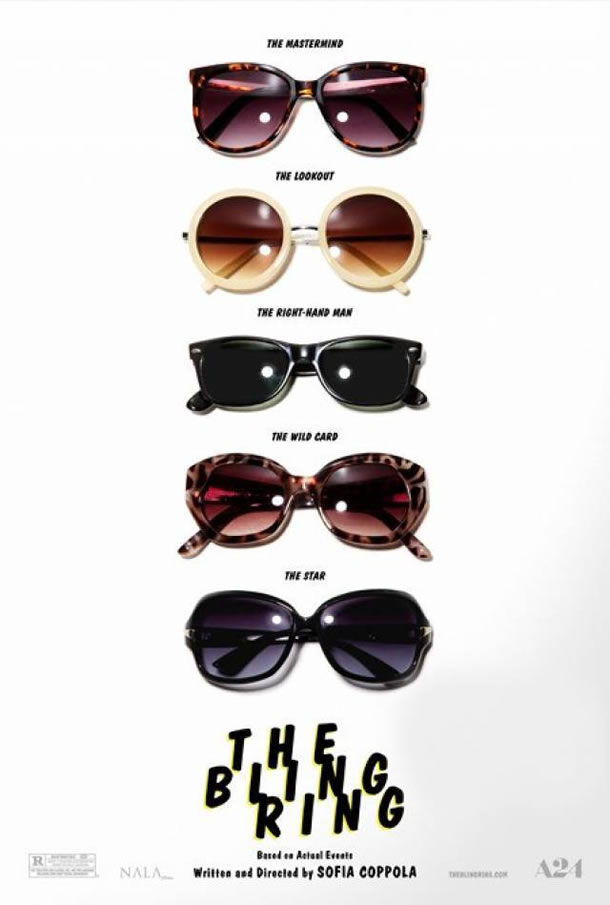 The teaser poster for Sofia Coppola’s forthcoming film The Bling Ring has arrived.

It features five pairs of sunglasses meant to represent the role that each “Bling Ring” member took on in 2008 when their crime spree began.

The film is based on the true story of the “Hollywood Bling Ring,” which consisted of seven thieves who robbed a string of A-list celebs, including Orlando Bloom, Megan Fox and (on numerous occasions) Paris Hilton.

Also dubbed “The Glitter Gang,” the group of former high-school friends were lured by the idea of easy money and living life like some of Hollywood’s richest stars. Security footage from Lohan and Patridge’s homes eventually led the police to the group.

Evidence suggests that the group stole over $3 million worth of property, including jewelry, designer clothing and pricey accessories.

The much-talked-about flick follows the teens as their obsession with living a luxurious celebrity lifestyle transforms from fun to dangerous.

It marks Coppola’s fifth feature film and shares some of the same themes as her previous efforts. For instance, Marie Antoinette proved to be a critique on fame and materialism while Somewhere focused on Hollywood fame.

The 41-year-old first garnered acclaim in 1999 when she released the haunting indie drama The Virgin Suicides. She went on to win a Best Screenplay Oscar for the 2003 dark comedy Lost in Translation, making her one of the few female directors to take home the award.

The Bling Ring opens on June 14 in limited release.