The X-Men star weathered a bizarre and terrifying attack from a stalker intent on marrying him; the mentally ill woman even confronted Jackman’s wife. 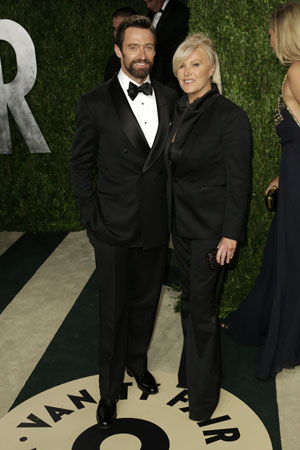 It was bad enough for Hugh Jackman when he just had to work out three hours a day to get in vein-bulging shape to play Wolverine. But stalker Kathleen Thurston just went and made everything crazily worse.

Thurston ran into Gotham Gym around 8 a.m. Saturday, Gawker reports, the West Village gym where Jackman trains to get into shape for the new X-Men installment, and threw an electric razor filled with her own pubic hair at Jackman.

Jackman told police that Thurston was outside the gym in the morning when he arrived, asking him, “We’re going to get married, right?”

The New York Daily News reports that Jackman then went inside and Thurston followed him. Once inside she whipped out an electric razor full of her own pubic hair out of a bag and went after Jackman, apparently intent on shaving him. Jackman, who thought Thurston was pulling out a gun, scampered.

Hugh Jackman & other stars not in love with gay rumors >>

“I hated him having those whiskers,” Thurston told police, according to the New York Daily News.

A personal trainer wrestled Thurston away from Jackman and out the door; she was arrested a few blocks away.

The New York Post reports that “the NYPD Crime Scene Unit recovered the weapon and had to pick the hairs out of it to match them with her DNA.”

The Daily News also uncovered the most chilling part of the story: On March 6, Thurston apparently showed up at the school where Ava, Jackman’s 7-year-old daughter with Deborra-Lee Furness, is enrolled.

Hugh Jackman game to do this musical next >>

“I’m going to marry your husband,” she told Furness.

“The most important thing is the security of my family,” Jackman told reporters Sunday night outside his home in NYC. “I’m very appreciative of what the DA is doing.”

Thurston reportedly lives in a shelter for the mentally ill.