Has the ultimate royal rock couple split up? Rumor has it that Sharon Osbourne and Ozzy Osbourne are on the outs — but is it true? 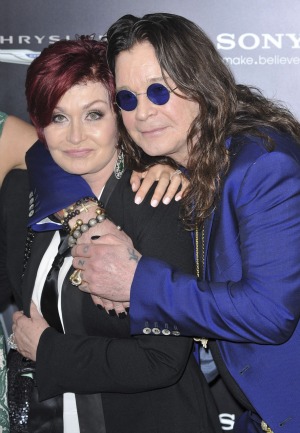 Sharon and Ozzy Osbourne have weathered many a marital storm in their time: Drug and alcohol abuse, violent tempers, health scares, and even the dreaded reality show curse have not been enough to tear their union. But now a new report says something far more banal could be causing the couple drift apart: Work.

Since the wild success of their reality show Meet the Osbournes 11 years ago, Sharon’s career has skyrocketed and today she is busier than ever, especially with her daily post on The Talk. Now some insiders say that success has come at the expense of her marriage.

“They are living at different addresses and are not spending any time together. They row a lot,” a source told The Sun.

Radar Online says Sharon is staying at the Beverly Hills Hotel while Ozzy stays elsewhere mere miles away — but the remodel work happening on the couple’s L.A.-area mansion may be the culprit rather than any rift.

While the pair have not spoken out about the rumors, their son Jack Osbourne took time out of his busy Coachella party schedule to trash the whispers on Twitter.

“…it’s all bulls**t,” he wrote. “Last time I check a lot of British news papers weren’t amazing sources of accurate information. Moving on…”

Keep up with the love lives of your favorite celebs by subscribing to our newsletter! >>

But Ozzy being a bit green with envy over Sharon’s success isn’t anything new or shocking. In 2005, he said, “To be honest, I was a little bit jealous at first. It’s not jealousy so much; I think my ego was damaged a little, but now I don’t care as long as she’s having fun and doing what she wants to do.”

Daughter Kelly Osbourne, who recently had a health scare of her own, was seen leaving the family mansion with a huge smile on her face Sunday, not betraying an inkling that anything was splitting up their close family.