Rebel Wilson’s first big hosting opportunity was an interesting one. There were ups and downs at the 2013 MTV Movie Awards, but no one can say Wilson wasn’t herself. 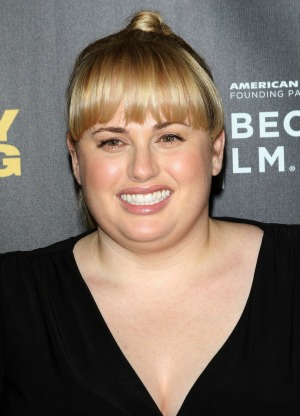 Rebel Wilson‘s hosting job was a big feat for a girl from Australia who burst onto the international scene only a few years ago with Bridesmaids. But she seemed to take the opportunity and really do what she could with it.

2013 MTV Movie Awards: Why Rebel Wilson will be an amazing host >>

The show started with Wilson in Australia. Actor James Franco showed up to tell her she had been selected as host. She then flew to the show, where she immediately broke into Miley Cyrus’s “The Climb.” She was joined by other singers from Pitch Perfect who sang a medley of Alicia Keys’ “This Girl Is on Fire,” Eminem’s “Lose Yourself” and Macklemore’s “Thrift Shop.”

In the middle of the performance, she changed out of a pink onesie and into a leather jumpsuit, which she ended up wearing for most of the show.

While the intro was quick, it was powerful and showed what MTV is really about — pop culture. Wilson’s intro showed her as a comedian, which is what she really is deep down.

“I was a bit surprised they asked me to host, and so was MTV,” she joked. “They thought I was Adele.”

The intro was short and sweet, and the show went directly into its first award. Like the hosts of many awards shows, Wilson wasn’t seen a lot for the rest of the show. When she appeared, she would attempt to move the show along by telling jokes, many that just didn’t work. Wilson is known mostly for her humor and many, many dirty jokes, but the audience didn’t seem to get most of them.

At one point, she asked actor Zac Efron if he wanted to give her an Australian kiss, which she said is like “a French kiss but down under.” Efron responded with a yes but didn’t really seem to understand the situation. The audience didn’t seem to find that one funny either, just like many of her other jokes.

Who won big at the MTV Movie Awards? >>

The highlight of Wilson’s appearance may have been a skit where she was supposedly cut from some of the major films of the year. Those roles had Wilson playing roles such as “Head Whore” in Les Miserables, the tiger in Life of Pi and a stripper in Magic Mike, where she acted as if she was having a baby on stage. At the end of that “deleted scene,” there was a disclaimer saying “Scene deleted for the good of all mankind.”

Wilson ended up winning two awards, one for Best Musical Moment along with the cast of Pitch Perfect and one for Breakthrough Performance.

MTV gives Bradley Cooper what the Oscars didn’t — an award >>

The 2013 MTV Movie Awards seemed a little disjointed, but Wilson did try her best to make it a memorable evening. She is an amazing comedian, but this show was not the best place to showcase that talent. Her jokes and her performance at her first big hosting opportunity were not the worst thing about the night, however, and her performance here won’t make us less likely to run out and see whatever Wilson is in next.