Emma Watson accepted the Trailblazer Award at the MTV Movie Awards, but the bigger news may have gone almost unnoticed. Jonah Hill made a big movie announcement. 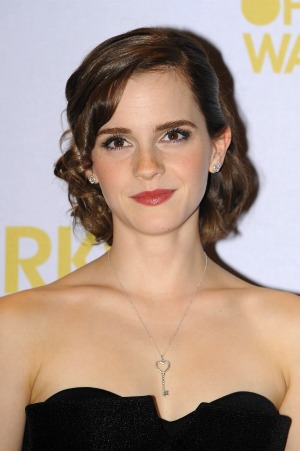 Emma Watson received the Trailblazer Award Sunday night at the MTV Movie Awards, and actor Jonah Hill had a big announcement for the crowd. He appeared via satellite to congratulate Watson for her award and said he wanted to announce that the two actors would be starring in the film adaptation of Fifty Shades of Grey.

Casting for the film has been one of the best-kept secrets in Hollywood, and Watson’s name has already been dragged into the possible talent pool. Back in March, a group hacked into the servers of Constantin Films and found Watson’s name “attached” to the film.

But the actress quickly denied there was any truth to the rumors. Just after the “news” was announced, Watson tweeted a denial.

“Who here actually thinks I would do 50 Shades of Grey as a movie? Like really. For real. In real life,” she said back in March.

“My safety word is tangerine,” Hill said in the middle of what was presumably just a joke. “If I say that word, you have to stop doing stuff to me.”

Who won big at the MTV Movie Awards? See the complete list of winners >>

Hill’s comment at the MTV Movie Awards seemed to go unnoticed, and as Watson accepted her award, she didn’t mention it.

The 22-year-old actress first appeared as a child in the Harry Potter films. Of all the child actors in the series, she has perhaps done the most with her career. She recently starred in films such as The Perks of Being a Wallflower and My Week With Marilyn.

Watson is quickly growing up to be a successful, and important, actress in Hollywood. While accepting her award, she said the one thing she had noticed in her highlight reel was “most importantly, how bad my hair was in the first Harry Potter film.”

But she said that one detail makes her realize what great fans she has.

“But most importantly, that you have supported me in all my awkwardness and let me grow into the actress and person I hope to be,” she said.

While nothing is confirmed, we are guessing the Fifty Shades rumor was just a joke of Jonah Hill’s, so don’t be counting on seeing him in some compromising positions (that aren’t hilarious) anytime soon.