This sci-fi thriller, shot in the gorgeous IMAX film format, takes us into the future to the year 2073. What does America look like after aliens explode our moon? A lot like Iceland, curiously enough. Tom Cruise gives us the tour of our nearly obliterated planet in this dystopian sci-fi flick that sends in the clones. 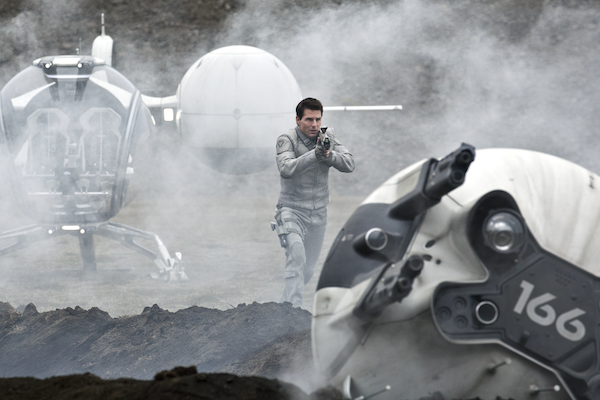 Despite getting a mandatory “mind-wash,” Jack Harper (Tom Cruise) has frequent memories of his 21st-century life before he underwent his futuristic lobotomy. What exactly does he remember? A beautiful brunette woman clutching a King Kong doll and kissing him atop the Empire State Building. But who she is — and more importantly — who he was, remains a mystery.

Jack now works as a tech who oversees the extraction of Earth’s last remaining resources, like water. Victoria (Andrea Riseborough) has been assigned to be Jack’s communications officer and lover. Together, they live in a Jetson-style loft thousands of feet above the decimated ground and follow orders from Sally (Melissa Leo), a sassy computer image with a Southern accent. She looks like a human, but all that mind-washing can make things confusing.

Forty years earlier, Earth was the victim of a devastating alien attack. The aliens exploded our moon, causing horrific earthquakes, storms and other natural disasters. Most humans starved to death and scavenger aliens called “Scavs” now roam the planet like feral cats. Sally sends deadly drones to obliterate them.

Battle of the flicks: Oblivion vs. To The Wonder >> 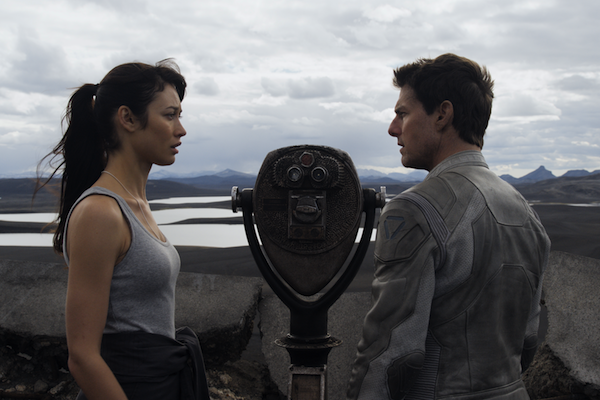 Other than the technicians who extract Earth’s remaining resources, the last human survivors have been whisked away to Saturn’s moon, Titan. Or so the mind-washed have been told. Jack and Victoria have a mere two weeks before they plan to travel to the mysterious moon as well.

Jack’s plan changes, however, when he finds a crashed spaceship with a hibernating woman named Julia (To The Wonder‘s Olga Kurylenko) in a sleeping capsule. He wakes the woman and believes she is the damsel appearing in his dreamy memories. A love triangle now forms, uncovering more secrets than the Bermuda triangle.

The art direction in Oblivion inspires, particularly the scene in the see-through hanging swimming pool (I mean, who doesn’t need to take a dip after an apocalypse?). But if clean water is actually as rare as Sally wants us to believe, it’s hard to justify all that H2O for a pool.

Many of the film’s exterior scenes were shot in Iceland, and its unique, volcanic topography magically doubles for a decimated Earth. The scenes where Jack flies his sleek, alabaster helicopter though an electrical storm are stunning in IMAX, making the audience feel as if they, too, are thousands of feet above the ground. 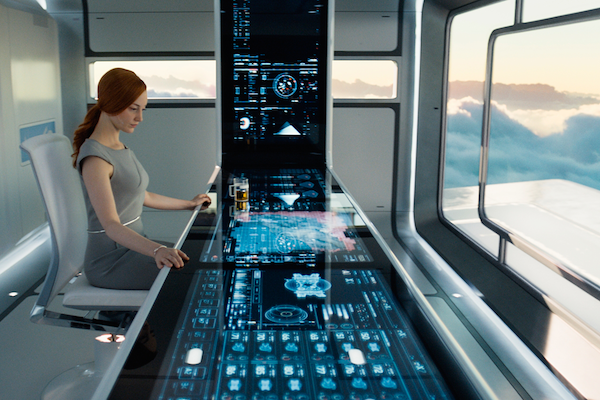 All the actors give striking performances, particularly Kurylenko and Riseborough, who are both as bold as they are beautiful. Tom Cruise delivers a solid performance as the sci-fi hero who must risk all to save the woman he loves.

Where the film wavers, however, is in the story. Once it’s revealed the Scavs aren’t who Jack thought they were, the plot begins to unravel like a radioactive wool sweater. And then there are the clones, which add a whole new element of confusion.

Bottom line: For sci-fi lovers, this movie makes a beautiful spectacle, particularly if you can see it in IMAX. Trying to piece together a satisfying story, however, made this reviewer want a mind-wash of her own.