Kelly Ripa admitted on Wednesday that she doesn’t keep in touch with former co-host Regis Philbin. Did they have a falling out, or are they both just too darn busy? 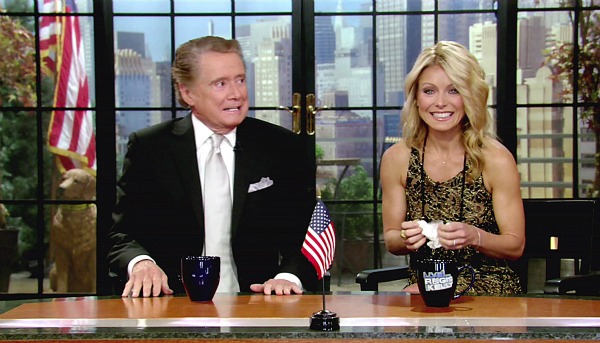 They made such a great morning talk-show team, so it may surprise fans of the old Live with Regis and Kelly show that the two do not stay in touch. Kelly Ripa admitted that fact to The Hollywood Reporter on Wednesday. She and her current co-host, Michael Strahan, were named to the magazine’s “35 Most Powerful People in Media” list.

When asked if she has seen her former co-host, who retired in November 2011, she only stated, “I haven’t seen him, no.”

It’s hard to imagine that the duo, who were so friendly on air for years, haven’t even managed a phone call or an email. Regis Philbin, who previously hosted the show with Kathie Lee Gifford, was instrumental in getting Ripa the job back in 2001 when she was still under contract at All My Children.

Face it! Kelly Ripa joins these other Botox beauties >>

However, it seems like there is no animosity between the two TV personalities — they probably just have busy schedules. Ripa, who is a mother of three, has continued her spokesperson duties for Electrolux and Ryka in addition to her Live gig. Beginning Aug. 17, Philbin will be hosting a daily sports talk show on Fox Sports 1.

OK, we doubt the 81-year-old is a great football player, but audiences will remember that he was fiercely loyal to his alma mater Notre Dame’s football team. Even the 41-year-old Strahan has retired from the football field, but he still participates in the sport by commentating for Fox NFL Sunday.

Either way, Philbin only has good things to say about both his replacement and his former co-star.

He told Us Weekly in October, “He’s got a good sense of humor. He’s a good guy. I think they’re doing great.”