Kim Kardashian held up her end of the bargain, but her estranged husband Kris Humphries failed to show up in court on Friday after they were ordered by the judge to appear. A divorce trial moves forward May 6. 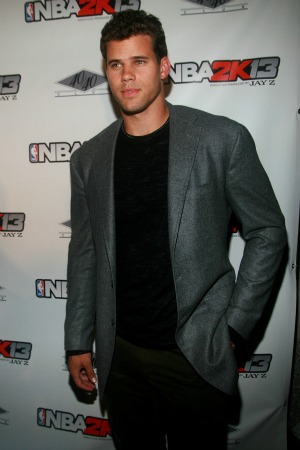 For someone who has dragged out divorce proceedings for over a year and a half, you’d think Kris Humphries would want his day in court. However, on Friday, the NBA player failed to show up to a mandatory court appearance.

Both Humphries and his soon-to-be ex-wife Kim Kardashian were ordered by the judge in the case to show up for a settlement hearing to hopefully avoid a trial. The pregnant Kardashian held up her end of the bargain and show up dressed conservatively in white pants and a silver tunic. She looked pretty serious and focused throughout the hearing.

According to an E! News source, the Brooklyn Nets player had an issue with his flight from New York to Los Angeles. This was an excuse similar to the one used by Lindsay Lohan in her recent court appearance.

For fans following this long, drawn-out divorce, there was not a huge media onslaught in the courtroom. Judge Hank Goldberg ordered the media out and said, “The nature of settlement and settlement conferences under the evidence code are confidential.”

The attorneys for both parties were satisfied with that decision.

As for the athlete, failing to show up in court could possibly have consequences.

Lynn Soodik, a Certified Family Law Specialist not involved in the case, told E! News, “It’s really bad if he didn’t appear and he didn’t get permission not to be here. It seems like it’s not as important to him.”

TMZ reported that the judge was not happy and set a sanction meeting for Humphries. He may be hit with fines for his failure to appear.

No settlement was reached on Friday between the feuding parties and it appears a trial will begin on May 6 as previously scheduled. There is one final settlement conference scheduled for April 19 which would be the last step in avoiding a trial. Both Kardashian and her ex have remained firm on not giving in, with Humphries insisting on an annulment and more money outside of the prenuptial agreement.

Hopefully, this case can be resolved before Kardashian has her first child with Kanye West in July, because waiting over a year for a divorce in a 72-day marriage is excruciating.