In the photo below, Kendall Jenner poses next to her photo shot by famed Victoria’s Secret photographer, Russell James. Kendall gushed about the possibility of posing for the iconic lingerie brand, Victoria’s Secret. 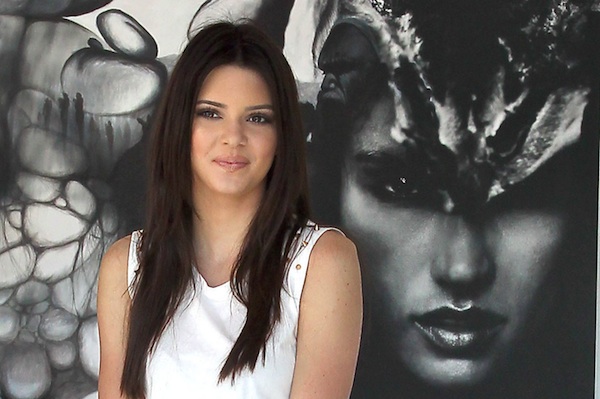 Can you picture Kendall Jenner walking down the Victoria’s Secret runway? Kendall hopes so — the 17-year-old daughter of Kris and Bruce Jenner says she’s set her sights on a pair of angel wings and lingerie as she gushed at the thought of becoming a Victoria’s Secret Angel.

E! News chatted with Kendall Jenner at a photography exhibit by Russell James, who is known for his work with several Victoria’s Secret models.

The celebrity news site asked Kendall if she would be open to modeling for Victoria’s Secret and Jenner couldn’t contain her excitement.

“It’s always been kind of a dream of mine,” said Kendall. “It’s a very great thing to do, and it’s something I’d love to do.” Kendall says her modeling career is more of a solo gig since her sister, Kylie, aims for more of a career like big sister Kim Kardashian.

Kendall Jenner lands on the cover of Seventeen >>

“Me and Kylie are sisters, but not everything we can always do together,” explained Kendall. “She’s not trying to be a model. She’s trying to be more like a personality. We’re trying to kind of separate ourselves — not in a bad way!”

The Kardashians profit off their sexy, sultry looks and it seems Kendall Jenner may be following in her older sister’s footsteps if she decides to trade high fashion for sex appeal with Victoria’s Secret.