Robert Pattinson and Kristen Stewart are still going strong, and he shows her the love with a pricey bauble with a very sweet inscription. 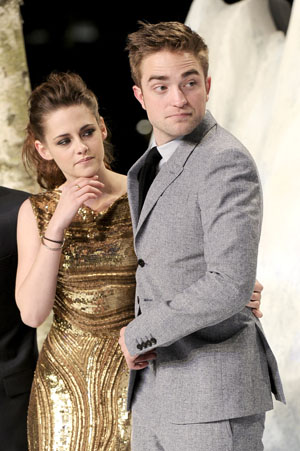 Guess when they were crooning “Forever!” at each other at the end of Twilight, they really meant it: Kristen Stewart and Robert Pattinson enjoyed a sweet birthday celebration this week, according to Star.

Stewart just turned 23 April 9, and Pattinson gave her a lovely birthday gift worth an astonishing $40,000.

The gift in question? According to Star, it’s an antique platinum and gold locket.

Inside, Rob (or Rob’s people, anyway) put photos of the couple inside, along with inscription: “Even if you can’t see me, my love for you is always there.”

Excuse me, there is something in my eye.

Why was Kristen Stewart limping at the Oscars? >>

“She was really touched — it was so incredibly sweet,” a source told Star. “She’s been in tears, saying she can’t face being away from Rob for too long and that it physically hurts her.”

Stewart and Pattinson have been spotted together recently, including at a Los Angeles bar and a birthday party for Katy Perry’s assistant, The Hollywood Gossip reported March 21.

Yay! Affleck and Stewart won’t make out on film! >>

In Touch Weekly also reported that Stewart has had a renewed interest in the relationship: Before the cheating scandal with Rupert Sanders, “Kristen played hard to get,” an associate of Pattinson’s tells the tabloid. “Not anymore. She’s going out of her way to prove herself.”

To that end, In Touch says, Stewart’s been being more friendly with fans and signing autographs, plus hanging out with Pattinson’s friends and going to a Hanson show together.

Will the next Robsten headline be a wedding announcement? Only time will tell.