SheKnows caught up with the country singer on the red carpet of the ACM Awards, where she spilled about hanging out and working with Blake Shelton and Miranda Lambert. 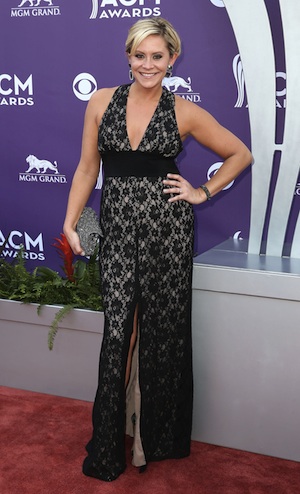 Gwen Sebastian has been singing for a while, but America was introduced to this North Dakota girl on the second season of NBC’s singing competiton, The Voice. While she didn’t win (she was eliminated in the battle rounds), her coach, Blake Shelton, took her under his wing, and now she is touring with both Blake and his wife, Miranda Lambert.

Personally, I love to hear when celebrities are just as cool in real life as they seem on television, and Sebastian says that Blake and Miranda don’t disappoint.

“They’re cool human beings. They give back. They take care of their own and root people on.”

Sebastian calls Miranda, “distinctive” and “pure,” explaining, “She’s exactly who she is.”

So what is it like being on tour with two of the biggest country superstars around? According to Sebastian, it’s just as fun as you’d think it would be.

“Because the boss [Shelton] is nice, it trickles down and everyone else is nice,” she says.

Blake and Miranda tweet about those pesky cheating rumors >>

Not only have Blake and Miranda welcomed Gwen into the country world, they’ve also given her advice, telling her to stay true to herself because that’s what it’s all about! Sebastian goes on to explain that staying true to yourself is especially important in country music because it’s “the people’s music.”

Look for Sebastian’s new album coming out in June, which will include a track featuring Miranda and a few additional guests — her parents! Music runs in the family.