A veterans group is threatening to boycott Jane Fonda’s new movie because of something that happened decades ago, but the actress says all publicity is good publicity. 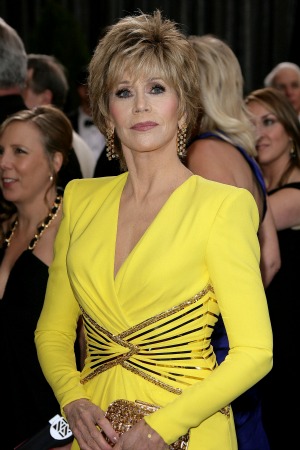 Seven-time Oscar nominee Jane Fonda is telling a group of veterans to “get a life” after threatening to boycott her new movie.

Robin Williams to play prez in The Butler >>

Now a Facebook group called Boycott Hanoi Jane Playing Nancy Reagan is calling for — you guessed it — a boycott of the film based on Fonda’s anti-American stance during the Vietnam War. “The moviemakers are free to choose, but it seems like it was their way of giving people like me the middle finger,” says Larry Reyes, a Navy veteran and founder of the page.

Fonda had a very succinct response when told of the controversy: “Get a life.”

“If he creates hoopla, it will cause more people to see the movie,” she told The Hollywood Reporter.

“I might not have always agreed with Nancy Reagan, but I admire her, and I’d never try to insert my views when playing her,” says Fonda. “I tried to be who she was: a forceful, loyal, powerful first lady.”

Keep up with all our movie news and more! Subscribe to the SheKnows Entertainment newsletter here >>

She did, however, have a portion of the script changed because she felt it made Reagan look “too mean.”

The actress is used to pushback on her career since her “Hanoi Jane” days.

“I figured it would tweak the right. Who cares?” she said. “I was very happy to hear that [Reagan] was pleased that I was playing her. Which shows how smart she is. She’s smarter than all those extreme right-wingers who are angry that I’m playing a woman whose politics are different than mine. Come on, it’s a movie!”

The Butler is set for release in October 2013.