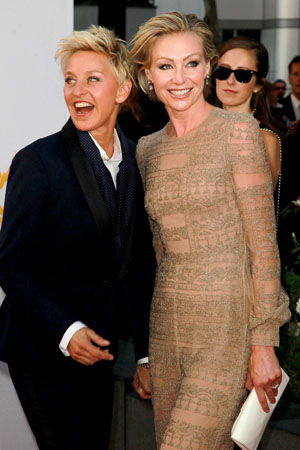 Ellen DeGeneres and Portia de Rossi were up for the love and the marriage, but don’t expect to see either one of them pushing a baby carriage.

The couple, who have been married for almost five years, are happy just being together.

“There comes some pressure in your mid-30s, and you think, ‘Am I going to have kids so I don’t miss out on something that other people really seem to love?'” De Rossi, 40, tells the May issue of OUT Magazine. “Or is it that I really genuinely want to do this with my whole heart? I didn’t feel that my response was ‘yes’ to the latter.”

De Rossi explains that she and DeGeneres, 55, thought it through.

“You have to really want to have kids, and neither of us did. So it’s just going to be me and Ellen and no babies,” she said.

Don’t worry about them, though. They’re happy: “We’ve settled into happily married life, we really support each other in whatever we’re doing and we’re incredibly happy, which is why you don’t see us in the press so much. There’s no drama to report.”

The couple keep busy instead decorating their magnificent ranch house in the Santa Monica, California, mountains. They showed off the estate to Elle Decor for its May issue.

The gorgeous house is huge: It used to serve as a monastery and a rehab facility. Two barns, which De Rossi fills with her beloved horses, and eight cabins are also included on the grounds.

DeGeneres is in charge of decorating: “I got a very thorough education in mid-20th century French furniture within the first weeks of our dating,” De Rossi, joked to the magazine.