Will Graham struggles with his feelings about killing for the first time and, ironically, goes to Dr. Lecter for some much needed therapy. 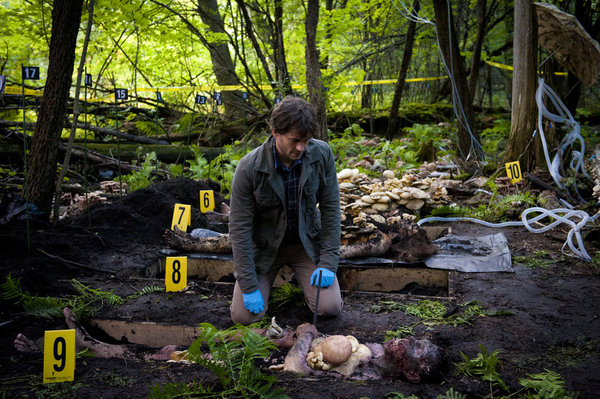 Will Graham (Hugh Dancy) is having a rough time. After being called in on a serial killer case by the FBI, he was forced to fire on and kill the murderer he had been hunting. Now, he’s dealing with the aftermath of those emotions and it’s starting to get in the way of his job. He’s having nightmares and hallucinations. He’s seeing dead people.

As if being paired up with Dr. Hannibal Lecter (Mads Mikkelsen) to solve murders wasn’t enough, now Jack Crawford (Laurence Fishburne) is forcing him to see the good doctor for some much needed therapy. However, opening up to a serial killer about your first kill is probably not the healthiest approach. And unstable Graham is already on the verge of crossing a dangerous line between understanding murderers and being one himself.

In the end of the episode, Graham finally opens up about the fact that he doesn’t feel guilty about killing Garret Jacob Hobbs. In fact, he liked it. It gave him a rush that he hadn’t felt before. Hannibal then gives him a disturbing lecture about how killing is a part of life and even God does it, using the example that God caved in a roof on top of 34 church goers recently. When Will asked how that made God feel, Hannibal eerily responded, “Powerful.” Shudder. It was super creepy.

This week Will and Jack were hunting another vicious killer who liked to bury people alive and feed them through tubes so they would survive longer. He “planted” them like they were in a garden and tried to turn them into fertilizer. One unfortunate victim was still alive when they dug him up, even though his flesh had rotted away to mostly bone.

Will’s a little trigger happy these days and he shot that psycho when he found him. But, he didn’t kill him. He’s showing some restraint, for the time being.

Stay up to date with all things Hannibal! Subscribe to our newsletter >>

Last but not least, Garret Jacob Hobbs’ daughter is still alive, but she’s in a coma. Jack thinks she was actually helping Garret lure in his victims, but Will refuses to believe it. There was certainly an accomplice, so it’s likely there are more gruesome murders around the bend.