They’ve taken a three-year hiatus, but now Fall Out Boy is back with a newer, harder sound. Oh, what a difference those years have made. 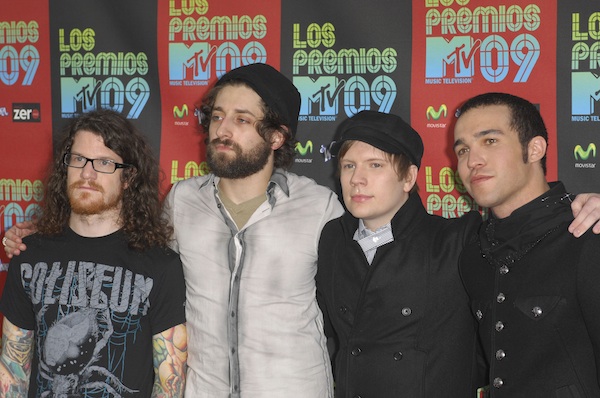 Fall Out Boy is streaming their new album Save Rock and Roll on their website falloutboy.com days ahead of its official release, and as previously reported, the album is chock full of celebrity cameos.

After listening to the tracks, this seems like an angrier Boy — like they have all graduated from that fun teen angst of their mile-long song titles (like 2006’s “A Little Less Sixteen Candles A Little More Touch Me”).

Now the boys are young men who want to hang out but are mad because they have lost the safety nets that were their parents and actually have to work at a gas station for a living.

Which makes sense, since the lyrical force behind the band is Pete Wentz who went through a very public divorce from Ashlee Simpson in 2011 that he reportedly didn’t want. There is nothing like the breakup of a marriage to turn a Fall Out Boy into an angry man.

The new 30 Seconds to Mars track is out of this world! >>

The cover art of a punk and a monk holding hands reflects the marriage between hard rock and the irreverent pop music we have come to expect from them. This dichotomy shapes up to be the theme of the album.

Save Rock and Roll starts off with violent, war-like strings and a call to “put on your war paint” in “The Phoenix”. But underneath the driving drums and industrial guitar, you can hear the younger Fall Out Boy coming through.

The rest of the album oscillates between really angry hard rock and a great mature Fall Out Boy sound. For the latter, may I direct you to the single “Young Volcanoes”. It certainly has the distorted guitars so used in the other songs on the album, but it also brings in a tribal drum poppy-ness that bands like Mumford & Sons and Phillip Phillips has put at the top of the charts.

But the song you really want to know about is “Rat a Tat” featuring pop-punk train wreck Courtney Love. And truthfully, it’s fine. I just don’t think that this song brings anything new to the party. It pretty much can be summed up by her first line, “It’s Courtney, b****.” Yeah, we heard that from Britney, too.

“Save Rock and Roll”

The title track features Sir Elton John himself. Look, the whole thing is a bit strange, but it totally works:

“I will defend the faith
Going down swinging
I will save the songs
that we can’t stop singing
You are what you love not who loves you.”

“Save Rock and Roll” sticks with you like so many other Fall Out Boy songs mainly because it takes a whole bunch of ingredients (strings, bass, Pete Wentz and a sprinkle of Elton John) and turns it into a pop rock anthem of love, anarchy and acceptance. No, it doesn’t make much sense, but it sounds great. Hear for yourself:

The album is available now. You can listen to the whole album before you buy it on falloutboy.com. Check it out and let us know what you think of the new album. Leave your comments below.