Lindsay Lohan might be trying to turn over a new leaf, but Charlie Sheen clearly didn’t get the message. The actor dishes the dirt on Lohan’s appearance on Anger Management while visiting The Tonight Show. 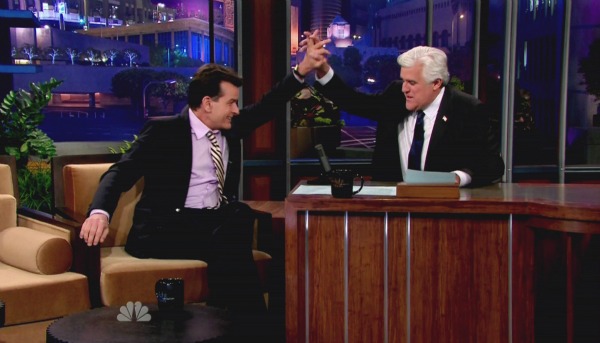 Lindsay Lohan might want to have a chat with Charlie Sheen about gossiping behind her back. She’s trying to rehab her image, but stories about the starlet just won’t die.

On Tuesday night, Lohan took to David Letterman’s stage to talk about turning over a new leaf. Just one night later, Charlie Sheen took to Letterman’s rival, Jay Leno, to address those Lohan rumors from her guest star appearance on Anger Management.

The late-night talk show host dove right into the Lohan gossip, bypassing the real reason Sheen was on The Tonight Show in the first place — to promote Scary Movie V.

Leno asked about the former child star’s tardiness to the set.

Sheen responded with praise for Lohan at first: “Not on day one. Day one was fabulous. She was on time. Hit every mark. Made us look off our game, which we weren’t.”

However, that’s where the praise ended.

Sheen continued: “Then we had to deal with day two. It was as though she had us held hostage because she gave us half a show.”

The excuse Lohan gave was an earache, but it didn’t seem like the former Two and a Half Men star was buying it.

He said, “No, she had an earache and was a little bit… four hours late. No, she was a couple of hours late. She was really not feeling well. We just worked around it.”

Then Sheen took a comedic beat and shared, “She was late, what can I say! But when she got there she was prepared — with an excuse.”

James Franco did not take Lindsay Lohan to bed >>

That was not the only drama the Mean Girls actress caused that day. It was also rumored that she stole a few items from wardrobe.

Sheen insinuated that Lohan did indeed take a few items, but he said she eventually paid for them when she was caught.

He revealed, “It’s true, but it’s not true. Nothing further, your honor. She borrowed some stuff and then was told they would take it out of her paycheck, and she said fine and that’s all it was.”

There’s been no word from the actress about Sheen’s storytelling on Leno, but the tabloid duo sure do make interesting news together.

Both Lohan and Sheen appear in Scary Movie V, which hits the big screen on Friday, April 12.