Winona Ryder, 41, was an A-lister in the ’80s who had a downfall in 2001. She’s stayed pretty quiet ever since, but she showed up at a movie screening Monday looking great. 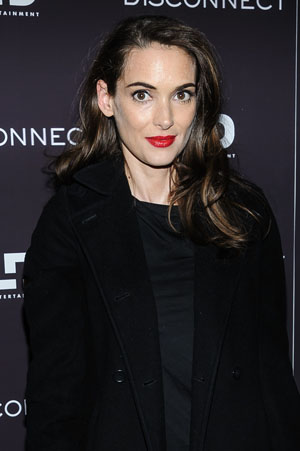 The 41-year-old star, everyone’s favorite weird girl in the 1980s thanks to monster (heh heh) hits like teen serial killer romp Heathers and horror comedy Beetlejuice, hasn’t been out and about much since her notorious arrest for shoplifting in 2001. But red-carpet photos snapped of her Monday at a screening of new thriller Disconnect show that Ryder’s looking better than ever.

The Huffington Post points out that Ryder’s not exactly making a comeback — the actress has never really gone anywhere, appearing sporadically in films all through the 2000s, though her last high-profile leading role was 1999’s Girl, Interrupted.

She was in Black Swan as a ballerina in 2010, and provided a major character voice for 2012’s Frankenweenie, directed by Tim Burton, with whom Ryder has had a long and fruitful partnership that produced films like Beetlejuice and Edward Scissorhands.

In 2007, Ryder explained to Interview Magazine why she’d stepped away from the spotlight.

“I think when all that was happening, I did sort of get trapped into working too much,” she said about getting caught shoplifting. “And then I sort of had… It wasn’t like a breakdown, but I was just exhausted, and I had to just stop and take care of myself. And then I kind of segued into only wanting to do one movie a year, and I was so lucky that I was able to do that.”

Yeah, that is pretty lucky!

Ryder said she watches today’s crop of young starlets from the distance only time can provide. “They think it’s going to be like this forever so they’re not being more careful. But I’ve been doing this for a quarter of a century now. I remember when so many people were the number-one person at the box office. And I’ve also seen so many people crash and burn, or be on top and then just make some bad choices.”