Brad Paisley is making the rounds to promote his new album, but he is stuck defending his LL Cool J collaboration “Accidental Racist” instead. 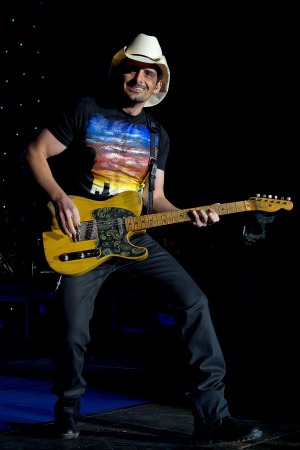 Country star Brad Paisley insists he is no racist, accidental or otherwise. During an appearance on The Tonight Show with Jay Leno, the singer defended his controversial song “Accidental Racist” insisting “it comes from a good place.”

“Racism has been on my mind,” Paisley explained.

“Last year, we had some really powerful movies deal with it really well. We had Django [Unchained] and Lincoln, and the media deals with it all the time, and I thought maybe it would be an interesting conversation between country music and rap music to deal with this subject between two individuals in a loving and understanding way.”

Want to keep up with all our music news? Subscribe to the SheKnows Entertainment newsletter here! >>

“I thought maybe it would be an interesting conversation between country music and rap music to deal with this subject between two individuals in a loving and understanding way,” he said.

The song is designed to be heard with the entirety of his new album Southern Comfort Zone and according to Paisley “is meant to touch on some themes that I think aren’t normally touched on in music — and in the context of this record, it makes a little more sense. But it feels like, when you take the song out of this record, it’s sort of like ‘What in the world? What got him on that?'”

“We don’t expect to get the answer in this song: It’s not perfect, but it’s honest.”

Paisley posted his initial thoughts about the controversy on Twitter earlier this week, while LL Cool J expounded on the song to CNN backstage at the ACM Awards. The hip hop/TV star will address the issue again when he sits down to chat with Jay Leno tonight.