Kevin Bacon “just wasn’t thinking” when he retweeted a message that gave away an important plot twist on his show, The Following, he admits. 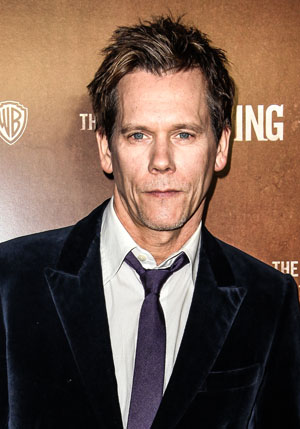 Kevin Bacon was the subject of thousands of angry tweets after he accidentally retweeted a fan’s comment that gave away a crucial twist on his show, The Following, before international audiences had seen the show.

Want to know what he tweeted? It’s a spoiler. You ready?

Ah, so that’s why Bacon has such an odd connection with charismatic killer Joe Caroll!

After the Twitter backlash, Bacon quickly realized his mistake and apologized.

“To all the fans abroad and late watchers I’m truly sorry I retweeted a spoiler,” the actor tweeted on April 9. “I just wasn’t thinking. Won’t happen again.”

Kyra Sedgwick reveals the secrets of her happy marriage >>

Since the episode containing the twist had already aired in the United States, perhaps Bacon can be forgiven for not remembering there’s a whole world full of The Following fans out there, um, following the show, who see it well after the twisty murder mystery airs in its home country.

In The Following, Bacon’s lead role is a former FBI agent, Ryan Hardy, who gets drawn into a case when a serial killer he put in jail escapes, and begins setting into motion a series of elaborate crimes planned with his obsessive followers (the “following” of the title).

The Following was created by screenwriter/producer/director Kevin Williamson, best known for the Scream horror movies. Williamson told Entertainment Weekly that he had mentioned to his agent that he hoped to get someone “like Kevin Bacon” as the lead in The Following. His agent replied, “What about Kevin Bacon?”

Movie star Bacon deigned to take a TV role and is no doubt happy he made that choice, since the show is one of the few breakout hits of 2013 and has already been renewed for a second season by Fox.