Adele is turning 25 this year and rumor has it that she just went back into the studio to record a new album. 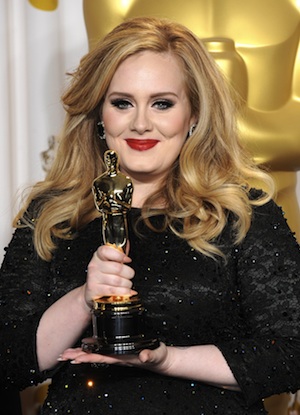 Adele has won nine Grammys, an Oscar, and let’s just say she probably had to build another room on her house for all of her awards.

Her debut album, 19 (released when, you guessed it, she was 19 years old), catapulted the young singer to worldwide fame thanks to her single, “Chasing Pavements”.

At 21, she released 21 and cemented her place in musical history by becoming the first artist ever to have an album hold the No. 1 position on the Billboard 200 concurrently with three No. 1 singles.

Now the U.K. tabloid The Sun reports that Adele is back in the studio citing a source as saying, “Adele wants to move with the times and is trying to make her new record sound as edgy as possible.”

Adele has made a living on her heartbreaks. Songs like “Set Fire to the Rain”, “Rolling in the Deep” and “Someone Like You” have reflected her tumultuous love life. But since the release of 21, that love life has become much more stable. She is planning to marry her boyfriend, entrepreneur Simon Konecki and in October of last year, gave birth to the couple’s first child.

Her songs have always been deeply personal, so will this mean a happier Adele? More important, will we want to listen to happy Adele songs? Or will she be able to channel all of that of angst from parenting into some great new music? Earlier this year, Adele told Vogue that now that she’s in a happy, fulfilling relationship, she’s ready “to write a happy record, and be in love and be happy.”

We probably won’t be hearing songs about the heartbreak that is running out of diapers and we’re pretty sure “Chasing Toddlers” will not be her first single from the new album, but it will be interesting to see how much being in love and a new mom will influence her sound.

Regardless, this will be one of the most highly anticipated upcoming albums. So what do you think Adele’s upcoming album will sound like? Will it be a new, happy Adele or more of the Adele we know and love?