In a diss that we all know goes out to ex Kim Kardashian, Ray J debuted the single “I Hit It First”, and everyone’s talking about it. 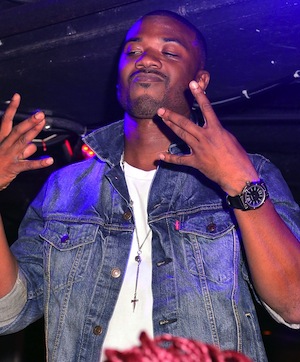 Call her what you want, Kim Kardashian and her entourage of family are business moguls. They have made a career out of PR and marketing, and if anything, her family knows how to take negative publicity and make it work in their favor.

And as Gossip Girl once said, “You’re no one until you’re talked about.”

Want to stay on top of any developments on this story and other Kardashian drama? Subscribe to our newsletter! >>

Well Brandy’s brother Ray J, the prince of R&B/watered-down rapping (clearly sarcasm ha!) tried to insult the reigning queen/tyrant of media with this release, but the finger turned right around on him because he sounds just as stupid in the song as he looked creating the track in the first place.

But, let’s ask some critical questions to give credit where it’s due.

So ironically, he used a Kardashian tactic — cultivating a dramatic moment only to capitalize off of it. Did music fans anywhere expect this to be the pinnacle of audio bliss? No. But, people everywhere (and perhaps even you now) will be just curious enough to take a moment to listen to it. Does it make him look desperate? Yes. But is he laughing all the way to the bank to cash in on the attention it’s receiving? Likely.

A busy clash of exaggerated beats and effects clutter the song in the introduction, and Ray J snaps in with a few sassy lines about how the mystery lady has a type and how little work he has to do to get girls before the catchy “I Hit It First” chorus debuts.

It’ll stick in your head in a Carly Rae Jepsen sort of way, and the only other enticing factor is to hear what lyrics he concocted. The song is comical, but it’s also degrading. I could never support a “man” who publicly shames a woman this way — no matter who or how irritating she is.

Even Ray J‘s sister is moving on with her life, why can’t he? >>

How ironic it is this song is produced by Nic Nac because Ray J clearly wants a bone? Oh, and Bobby Brackins is also featured on this track. So the only congratulatory remark I shall make toward Ray J is that I commend him for is reverse Kardashian tactic to get attention when he may have otherwise have been growing irrelevant.

Purportedly, the rapper has remarked this song isn’t about her, but the lyrical breakdown suggests otherwise. The lady has a thing for “ballplayers” (Humphries) and “rappers” (Kanye), and chose to go “west” (Kanye’s last name). And he makes mention of creating another “movie” (sex tape). So yeah, sorry, I don’t believe you.

Kanye has bigger problems than this! He’s getting sued for a song! >>

I know you’re intrigued, just go ahead and listen — no one has to know. Let me know what you think of the song!

What else are we raving about? Check out our other music reviews: