The enemies from Miles’ past keep cropping up. Hell hath no fury like a woman scorned, and Miles seems to have scorned quite a few. 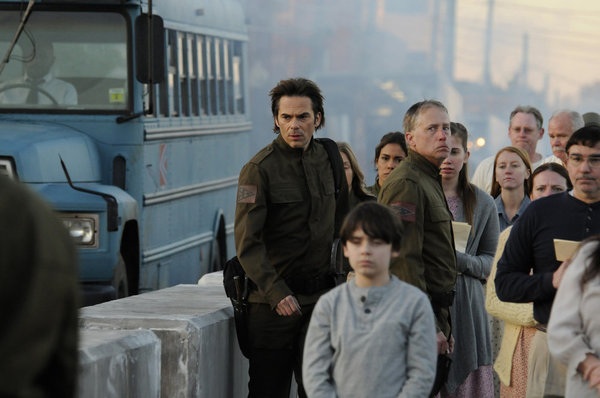 Talk about a needle in a haystack. On the next episode of Revolution, our heroes will travel to Atlanta, searching for the nuke Monroe (David Lyons) acquired in the last episode. Not to put a damper on this exciting race to find the weapon before the Militia finds the rebels, but we don’t really know anything about this nuke Monroe traded for. Obviously, it’s not a good thing to give the crazy guy a giant bomb, but using it isn’t as easy as just dropping it out of a helicopter.

Not only that, but I thought Monroe wanted to control all of the United States, turning it into a Monroe Republic. What’s the point of dropping a nuke on the populace you want to control? Hopefully this week will shed a little more light on Monroe’s motive. Why does he want the nuke? And whom does he plan to bomb?

The rebels’ search for the nuke will take them outside the Monroe Republic, uncharted waters for Charlie (Tracy Spiridakos). It’s her first time leaving the Republic. Outside, they find a thriving city within the Georgia Federation that is trading with Europe. It looks like Miles (Billy Burke) also finds an old friend who’s out for revenge. She’s keen on taking out her anger on Miles’ junk for his crimes against her personally.

Want to stay on top of the latest Revolution gossip? Subscribe to our newsletter >>

No word on Captain Neville either, other than to mention he’s on the run. We wonder how long it will be before Monroe discovers he’s fled the city. Though we don’t see it happening anytime soon, maybe Neville will eventually realize the error of his ways now that Monroe has turned on him.

The next episode of Revolution airs this Monday, April 22, on NBC. Here a preview of the episode: