Garfunkel and Oates plus Two Idiots lead the way in awesome shows planned for IFC’s future. 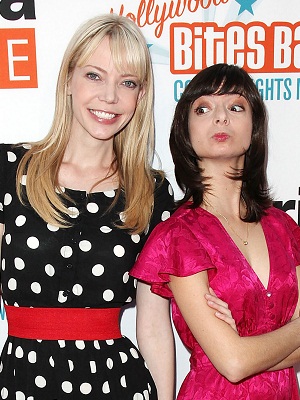 It appears as if IFC is jumping on the scripted bandwagon, too. According to The Hollywood Reporter, the channel has just ordered two pilots and eight scripts, marking its biggest pull for scripted material ever. To top it all off, a few of IFC’s new interests include female-centered storylines… a first for the channel. Pre-tty cool!

The coolest of IFC’s pilot orders is a little gem called Garfunkel & Oates. The comedy centers on the comedy-folk girl group made up of Riki Lindhome (Garfunkel) and Kate Micucci (Oates). While the pilot addresses the girls’ career aspirations, it also follows their sometimes challenging attempts to relate to people whose lives are more “straight and narrow.” Lindhome’s and Micucci’s lives and career choices are a little more quirky and adventurous. After all, they make a living singing sometimes raunchy and nearly always satirical songs.

Another awesome show currently in development comes from Megan Mullally (Will and Grace, Party Down) and Tina Kapousis. Two Idiots follows another pair of quirky women whose lives seem to take on an I Love Lucy feel as even the most menial everyday activities lead to misadventures. Their Ricky and Fred are played by their butler and a dimwitted shared boyfriend. If this is half as funny as anything else Mullally has ever done, it’s sure to be a winner.

If being lady-lead is the least of your concerns, International Plan sounds hilarious. The show (another comedy) is based on the true story of writers Michael Blieden and Eric Ledgin (both worked on Late Night with Jimmy Fallon), their international quest for love and the bonding process that came along with the project. We love watching a good bromance unfold!

Those shows are only the tip of the iceberg, though. IFC also has a new animation in the works as well as a few other comedies. It sounds like 2013 and 2014 could shape up to be pretty decent years for IFC. We’re excited for all the new viewing options!