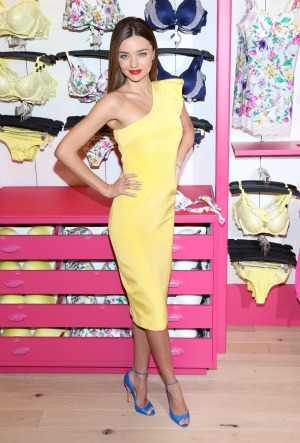 She’s in, then she’s out, and now she’s back in again. On Wednesday, media reports were speculating that supermodel Miranda Kerr was out as a Victoria’s Secret Angel.

The rumors began when Us Weekly erroneously reported that the 30-year-old had lost her contract with the lingerie giant for having “a difficult reputation” and for “not being a big seller” like her Angel counterparts.

Her reported $1 million contract was being revoked after three years since she was being overshadowed by colleagues like Alessandra Ambrosio and Candice Swanepoel.

The entertainment site’s sources said, “They can still use her for catalogue, where she will get a day rate, but she doesn’t have to be an Angel to do that.”

However, by Wednesday afternoon, Victoria’s Secret’s chief marketing officer was clearing up a lot of confusion. Ed Razek told E! News that the company had “no plans to stop working with her.”

What about that big Angel’s contract?

Razek said, “While her international commitments have kept her away from us more than we’d like over the past few years, she will always be an Angel to me. We have no plans to stop working with her. In fact, I’ve already invited her to walk the runway in this year’s fashion show and, happily, she’s agreed.”

Want to stay on top of all the latest Miranda Kerr news? Subscribe to our newsletter here! >>

Did the executive dodge answering that question, or are we just reading between the lines?

One thing that is certain is Kerr’s reputation.

Razek shared, “She is also a consummate professional. Any rumors to the contrary are simply untrue.”

While fans will definitely see Orlando Bloom’s gorgeous wife walk the runway in Victoria Secret’s annual show, it is still murky as to whether Kerr was offered another Angel’s contract.