We first fell under Emma Watson’s spell in 2001, when she appeared as bushy-haired smarty-pants Hermione Granger in Harry Potter and the Sorcerer’s Stone. Fast forward seven sequels, and the precocious 11-year-old witch from the first film transformed into a super-chic actress taking on progressively grown-up roles. Here are a few reasons why we’re smitten with this year’s MTV Trailblazer. 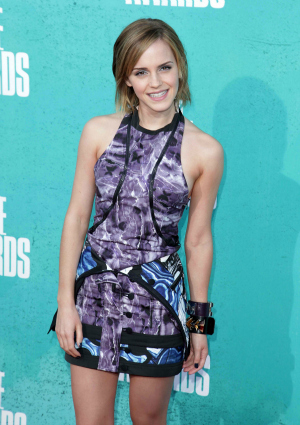 Having closed the chapter on sweet, naïve Hermione, Emma is forging full speed ahead into far racier roles. In The Perks of Being a Wallflower, she plays the first love of an introvert with some serious psychological stuff on his plate. In her upcoming, based-on-a-true-story movie The Bling Ring, she plays the ringleader of a group of vapid, manipulative young adults who use the internet to keep tabs on celebrities so they can rob their homes. In photo shoots for the film, Emma further shed her inhibitions… and her clothes! In one still, she’s in her panties. In another, she’s showing off her bra. But she never comes across as raunchy — rather, her calculated brazenness just makes us admire her fearlessness.

It’s no secret Hermione was the smartest witch around. As it turns out, the role wasn’t such a stretch for Emma. In addition to her brilliant acting ability, Emma flexes her impressive smarts by attending Brown University — one of the country’s premier Ivy League universities. The brainy thespian matriculated into the student body in 2009, shortly after wrapping up the last Harry Potter film in the franchise. She took two breaks from Brown — once to complete a semester abroad at prestigious Oxford University, and another to pursue film roles like The Bling Ring. Now she’s back with her nose in her books, happy to be among her fellow academics.

We want to raid her closet

While we were sad (okay, slightly devastated!) to see the Harry Potter saga come to an end, we were elated to finally see Emma get out of those dowdy robes. She’s hit the red carpet since in everything from a lacy Valentino minidress to a voluminous Oscar de la Renta gown — and she rarely misses the mark. What’s more, Emma proves to be a style darling committed to ethical fashion. In 2009, she announced collaboration with People Tree, a Fair Trade Fashion Company, on their spring/summer collection. In 2011, she collaborated with Alberta Ferretti on a line of environmentally friendly dresses dubbed Pure Threads. Of such endeavors, the actress asserts, “I’m happy to encourage anyone interested in making conscientious clothing from raw, sustainable materials, so much so that I’ll work for free.”

She kicks major a**, literally

Emma stars alongside a slew of celebs in the apocalyptic comedy This is the End, hitting theaters in June. One of those co-stars happens to be funny guy Seth Rogen, who does triple duty in the film as the writer, director and star. When they began filming, Seth proposed a scene out-of-character for mild-mannered Emma — a scene in which she and Seth argue. “She was into it. We wrote her the role and we sent it to her and we said, ‘It’s a little crazy, but we think you’d be really funny doing it.’ And she was totally game,” Seth told MTV News, laughing, “and it was awesome and she beats the sh** out of me in the movies, which may have been one of the reasons she was so psyched about it.”

Watch Emma in The Bling Ring: