Kim Cattrall says there’s no particular magic to holding on to her killer physique: The 56-year-old actress stays on a perpetual diet. 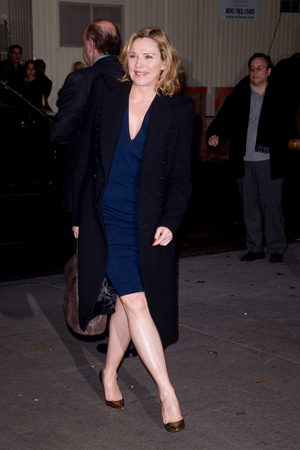 How does Kim Cattrall keep looking so good right into her 50s? She doesn’t eat what she wants.

Um, what? She was in her early 40s when she was cast as superhottie Samantha Jones on Sex in the City and almost 50 when it stopped airing in 2004. She was 54 when she appeared in Sex in the City 2 in all manner of strappy minidresses. Her arms look incredible! What is she, a wizard?

Nope, “dieting, exercising and minimizing stress” is her fountain of youth.

Almost two decades after hitting her 40s and thinking she was past it, she’s still being cast as a sex goddess.

“I think it’s because I take care of myself,” she said. “I joke that I’ve been on a diet since 1974, which is basically true. I like to eat, and my body type is not naturally this thin, especially at this age.”

Ugh, so it’s 40 years of counting calories and wondering if you dare sneak an extra sugar in your black coffee? How depressing.

Cattrall’s admissions about her eating habits are a particular downer after revelations surfaced this week from former Vogue Australia editor Kirstie Clements, who penned a tell-all book about the fashion industry. Clements claimed models ate tissues to help them feel full while still staying razor-thin.

She also wrote about a Vogue shoot in Marrakesh where she saw the top model abstain from all meals for a solid three days. On the last day of the job, the model could barely stand or hold her eyes open.