He may be the real king of late night (at least on NBC), but is Lorne Michaels about to have his hand in all three shows in the network’s late-night lineup? 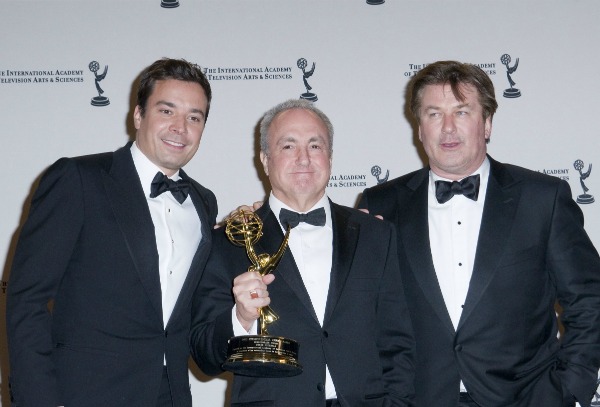 With Jimmy Fallon’s move to the Tonight Show, the rest of the late-night lineup is somewhat in question. Fallon’s former slot has yet to be filled, and no one seems to be talking about whether Carson Daly will be staying on his 1:35 a.m. show.

According to the New York Daily News, NBC is looking to Alec Baldwin to help fill the holes they’ve created for themselves. Baldwin’s show, 30 Rock, just ended, and he finds himself with quite a bit of free time now.

While Baldwin is easily a qualified candidate, the one person who ties the late-night puzzle together is none other than Saturday Night Live EP Lorne Michaels. Not only was Michaels executive producer on 30 Rock, but he’s also be the executive producer of Late Night with Jimmy Fallon, and will keep similar duties when Fallon moves up a time slot.

The NY Daily News is reporting that Baldwin would be used to fill the time slot currently filled by Carson Daly. So who is the network looking for to fill Fallon’s 12:35 a.m. slot? There’s been talk that SNL’s Seth Meyers could be taking over that show.

Lorne Michaels has done a lot for NBC, and the network obviously trusts him with their late-night lineup. As for Baldwin, fans of 30 Rock and his podcast are likely to follow him to the late-night slot.

“(Baldwin’s) podcasts have developed a cult following,” a source told the NY Daily News. “He’s shown surprisingly strong interviewing skills, has a deep relationship with Lorne Michaels and a development deal with NBC, so it makes sense that they would at some point see if he has an interest in being part of the lineup.”

If all goes as NBC hopes, the network is about to give the other networks a run for their money in the late-night lineup.