Just days before her newest stint in rehab, the actress put on a brave face and appeared on the Late Show with David Letterman. His questions weren’t exactly what she expected though. 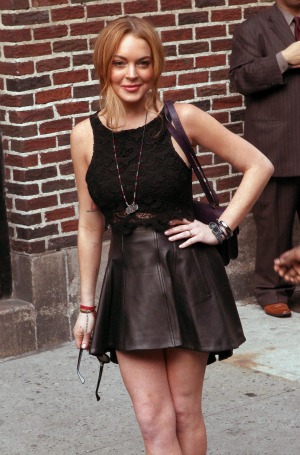 Lindsay Lohan made the brave move to appear on the Late Show with David Letterman and, as expected by all but her apparently, he asked about her current legal troubles. According to TMZ, the late night host asked multiple questions back-to-back about Lohan’s problems and her current sentence.

“Aren’t you supposed to be in rehab now?” he asked.

Lohan responded quickly, saying, “Don’t you watch anything that goes on? What are you a tabloid now?”

But eventually, she did give him an answer, saying she would be entering rehab on May 2. According to TMZ, she said the time will be “a blessing and not a curse.”

Letterman kept at the actress, asking her what she will be “rehabbing”.

“We didn’t discuss this in the pre-interview,” Lohan answered. “I think I’m the happiest when I’m working, and the healthiest, and I think this is an opportunity for me to focus on what I love in life and I don’t think it’s a bad thing. It’s a blessing.”

The actress seemed tired, at that point, of answering questions on the subject. Letterman next asked her if she feels she has an addiction problem.

An obviously annoyed Lohan then reminded Letterman that they have discussed this issue in the past.

“See, I’m the one who’s having the blackouts,” Letterman responded. “I ought to be in rehab.”

The interview seemed awkward for both parties involved, but Letterman didn’t let up when Lohan tried to change the subject. Her current troubles are on viewer’s minds, so it may have been brave, but important, of Letterman to ask.

It’s possible Lohan may have done the interview as part of an agreement with Scary Movie 5 and was supposed to promote the movie. But Letterman delved a lot more into her personal life than she obviously expected.

Lohan’s stint in rehab is expected to last three months.