In a Tuesday interview with Ryan Seacrest, Avril Lavigne and Nickelback’s Chad Kroeger dished the details about their upcoming wedding and how they fell in love at first sight. 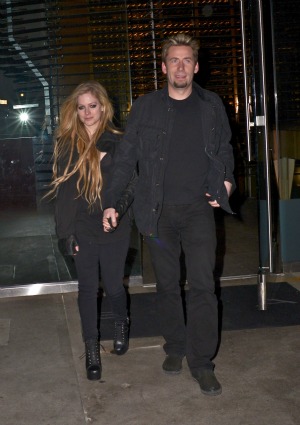 When a couple says it was love at first sight, you better believe them. That’s the case with singer Avril Lavigne and her fiancé, Nickelback lead singer Chad Kroeger. The duo, who shared their love story with Ryan Seacrest on Tuesday, revealed that they knew right away that they were meant to be together.

The 38-year-old Kroeger told Seacrest, “When you’re sitting there across from someone singing into the microphone and you’re singing a love song, you start to develop feelings for them. And it just kind of blossomed into this kind of thing and the next thing you know… we started dating [last summer].”

The two musicians were working together last summer in the recording studio on Lavigne’s new album.

Her fellow Canadian husband-to-be revealed his feelings pretty quickly to the “Complicated” singer. She responded in kind.

“We started dating and the next day he was like, ‘You know I’m gonna marry you. And I said, ‘I know.’ It was one of those things that we just knew,” shared Lavigne to Seacrest.

The engagement followed after just one month of dating which shocked many people close to them, but they were confident with their relationship.

The 28-year-old bride-to-be continued, “Well that’s how we met — in the studio — and I was really excited to work with him because he’s also a musician. [We] wrote a bunch of songs together, became really good friends and now we have a wedding.”

As for the wedding details, Lavigne promises it will be “spectacular”.

However, don’t expect a big wedding from the singer who was previously married to Deryck Whibley of Sum 41.

Chad Kroeger’s ex says he cheated on her with Avril >>

She said, “It’s kind of just a lot of close friends and family. It is smaller, [but] it’s gonna be quite spectacular and there’s a theme to it. But Chad doesn’t even know everything.”

Kroeger seems OK with being kept in the dark about some of the plans, too.

He said, “Every man knows that we get very little participation in the planning — and these are good things.”

One of the songs the couple worked on together, “Here’s To Never Growing Up” dropped on Monday. Her album will be released this summer.