Kate Middleton is adding a new job to her ever-growing royal resume: She’s going to be the “godmother” of a Princess Cruise Lines ship. Yes, seriously. 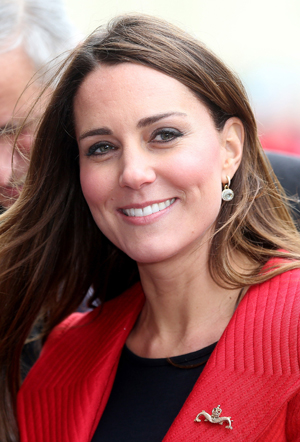 Kate Middleton might be growing her own little royal baby, but that doesn’t mean she doesn’t have time for another princess.

Princess Cruises, that is.

The Duchess of Cambridge has signed on to be the “godmother” of one of the company’s cruise ships, according to a release.

“It is a great honor for Princess Cruises that Her Royal Highness The Duchess of Cambridge has accepted our invitation to become the Godmother to Royal Princess,” Alen Buckelew, the cruise line’s president and CEO, said in a statement.

“We are delighted that the Duchess will launch our new ship and can think of no better way to celebrate our company’s British heritage and our commitment to the country.”

Among the Duchess’ godmother duties? She’ll be on hand to name a ship during a June 13 launch in Southampton, England.

But, doesn’t she have other names to worry about — like, maybe, the name of her future son or daughter? Well, it sounds like Prince William and his bride already have a few names picked out.

“We have a short list for both [boy and girl] but it’s very difficult,” she told a group of fans recently. “My friends keep texting me names.”

The top name under consideration? Elizabeth Diana Carole Mountbatten-Windsor, according to royal sources.

For now, the official name of her baby belly is “Our Little Grape”. And the due date?

“It’s around mid-July, but apparently babies have their own agenda,” Middleton joked.

July will be here before we know it!