The controversial romance between the two singers is reportedly on hold as both Rihanna and Chris Brown go out clubbing and flirting. 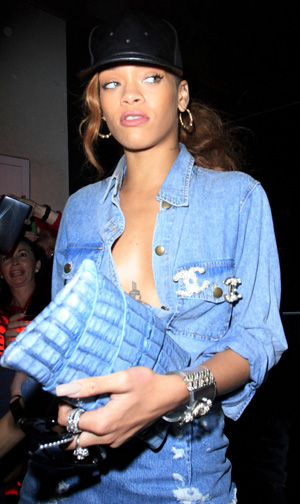 Both Rihanna and Chris Brown had a great weekend, apparently. They just didn’t have it together.

Brown told a Los Angeles radio station DJ in March that he and Rihanna were no longer together, and Page Six reports that over Easter weekend he met a “beautiful New York waitress” at NYC nightclub Finale.

A source told Page Six, “They hit it off and headed out together. They also spent Easter Sunday together.”

Chris Brown hopes no one else is “hitting” Rihanna >>

An entirely different waitress, this one in Los Angeles’ Playhouse nightclub, was photographed over the weekend holding Brown’s hand, but she told TMZ that she’s just Brown’s waitress. “Nothing has ever happened. I just work there. In the photos, he was handing me a bottle to drink out of. Of course people are going to twist it another way. I don’t go for black guys.”

Meanwhile, Rihanna was photographed in the chichi Greystone Manor Supperclub in West Hollywood Monday night. TMZ reports that she arrived at 1 a.m. with her assistant and security guard, hung out by herself for a while, and then left after about an hour.

The morning after she posted a photo of her legs in bed, wearing the same Tom Ford shoes that she’d been out in the night before.

She gave the photo the caption, “Evidence of an epic night!!! #wokeupinmyTomFordes,” the New York Post reported. Now if that’s not a barb to an ex, I don’t know what.

Brown also appeared in court Friday, accused of not completing the community hours required when he pleaded guilty to felony assault of Rihanna. The matter’s been put off until June 10 so attorneys can gather more information. Rihanna, who attended his last court date, was absent this time, the New York Post notes.

And the Rihanna and Chris Brown show grinds on.