Tom Cruise has admitted he was totally blindsided by Katie Holmes slapping him with divorce papers just days before his 50th birthday. 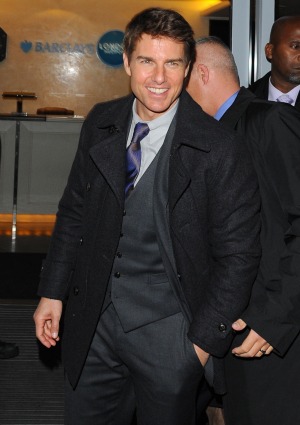 You think you were shocked when Katie Holmes up and left Tom Cruise out of nowhere? Turns out he was, too!

The Oblivion star spoke about the split for the first time and said he was utterly blindsided when his marriage suddenly fell apart.

“I did not expect that,” he told German TV network ProSieben and Bunte magazine.

Rumor has it Holmes plotted the split for months while pretending everything was right as rain in her marriage while Cruise was around. The reason? Cruise was purportedly ready to fully indoctrinate their daughter Suri into Scientology, and Holmes was not having it.

After their lawyers breezed through negotiations, Holmes wound up with custody of Suri in exchange for receiving very little, if any, of Cruise’s vast fortune.

But Cruise, who was also married to Mimi Rogers and Nicole Kidman (with whom he has two kids, Connor and Isabella), says it’s all par for the course in this theatrical production we call life.

“Life is a challenge,” he said. “To be 50 and have experiences and think you have everything under control, and then it hits you — that’s what life is… Life is tragicomic. You need a certain sense of humor.”

See Tom Cruise in Oblivion when it hits theaters April 19.