Almost unrecognizable beneath vintage styling and a wig, Linda Cardellini of Freaks and Geeks and ER landed on Mad Men’s sixth season in a role that horrified fans. Beware: Spoilers ahead. 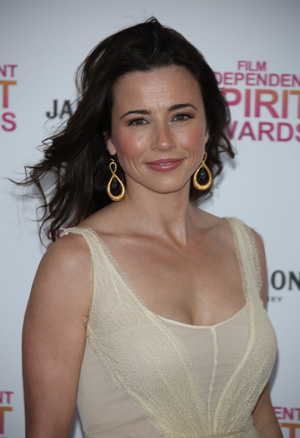 Linda Cardellini was on Sunday’s Mad Men. But you shouldn’t beat yourself up if you didn’t recognize her.

The formerly fresh-faced lead of cult TV series Freaks and Geeks, and Nurse Samantha Taggart on ER was buried under heavy period eyeliner and a poofy wig, and not even her friends and family members had been told she was going to be on the show.

Her role? A real heartbreaker: A neighbor and seeming pal of Don and Megan, who, it turns out, has been sleeping with Don for some time.

Cardellini told Entertainment Weekly that she hoped fans wouldn’t hold her role against her. “You know, the hard thing about audiences not liking what a character does is that they sometimes take it out on the actor personally and that’s something that you know when you become an actor or actress, but it’s always hard to deal with when it actually happens,” she said.

Yep. Just ask Larry Hagman of Dallas fame, or, you can’t actually ask him because he’s passed away, but he famously told a story about being smacked in real life by a female fan who took offense to his double-dealing character J.R. Ewing in the 1970s.

Cardellini felt at home on the Mad Men set because she’d been in movies with Vincent Kartheiser (Pete Campbell) and John Slattery (Roger Sterling), but she knew her role would upset fans, just as she did with her part on Boy Meets World, as a girl who comes between Cory and Topanga: “I hadn’t really watched that show. I was just so excited to have a job on television and I really didn’t realize how vehemently people would react to my breaking them up. People are still mad about it!” she told Entertainment Weekly.

She also noted that unlike other shows where the atmosphere would be looser and a certain amount of improv was the done thing, that’s not the case on Mad Men: “It’s very precise, and you may not even understand the part that you’re playing in the bigger picture. You do precisely what is instructed in terms of what is worded perfectly and what is in the stage directions.”

And she didn’t know where her relationship with Don is going any more than the audience does: “Matt never gives it away! The secretive part isn’t only for the audience. It’s for everybody around set,” she said. “There are not that many jobs as an actor where you don’t get to know what [your] character will be doing from episode to episode. It’s sort of a giant unknown and you go along and trust. I think that’s what’s really special about Mad Men.”